The last two days has been spent on replacing an old tumbled down fence, the most of it anyway. The boundary is between us and Cosicot, up the hill from us a little bit. The old fencing was a mish mash collection of wooden fence panels, slotted into concrete posts at various distances. These are what we inherited when we bought the whole Roselea plot almost 20 years ago now.
But also, our lovely Mount Sod has done its usual thing of collapsing in some places around the edge and have pressed into the old fencing too. 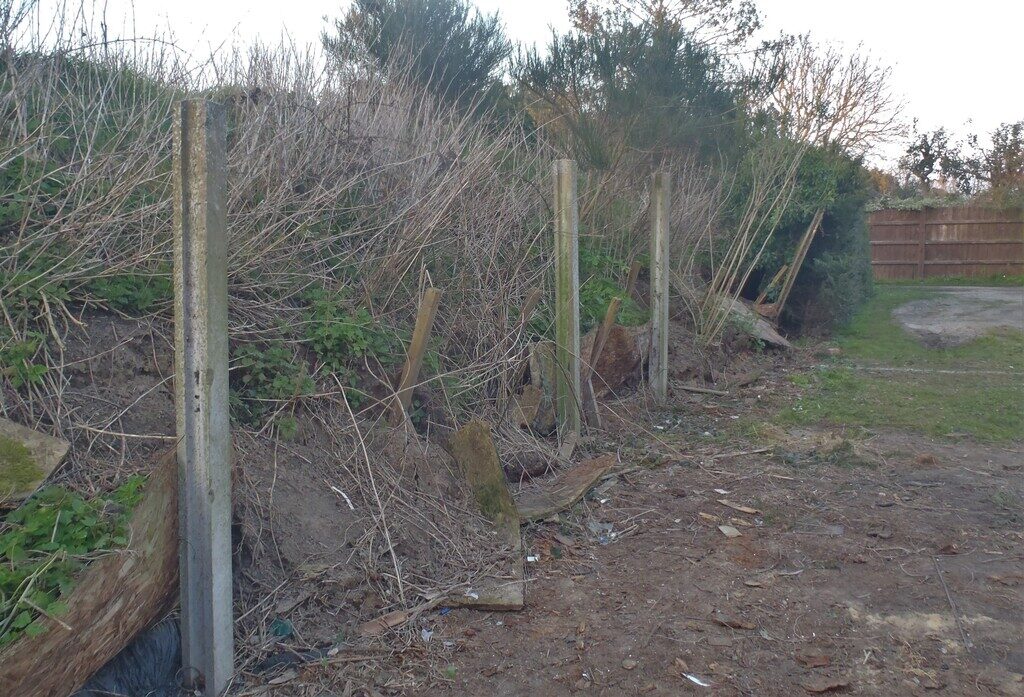 
We had all ways planned to replace this fence with a nice high quality one when we have finished enough of the house to move in and move mount sod to it final resting place at the bottom of the plot.
So after talking with our neighbour, we agreed that we will put up a new temporary barrier to both act as a new fence but also to act as a barrier against any further subsidence, to hold the status quo for another few years. It is all happening now because our neighbour wishes to build a new replacement garage and he doesn’t want to have to worry about our Mount Sod collapsing any further and messing up his brand new garage!
The first job on the first day was to dig out the lower section of Mount Sod so we had room to work on both side of the fence. We got the mini-digger out, drove up the Loke and into our neighbour’s property. There were originally 4 concrete posts, widely separated, being well over 2.5metres apart but it was still a careful process of digging in between these posts and “chucking” the soil back up on to the top of the mountain of dirt. The next task what to rescue three more concrete posts we had lying in the other corner of our garden, pick them up one by one up using a hook and chain dangling from the digger’s bucket and transfer them around to the area of work. We had swopped the bucket over to our narrowest 300mm wide bucket to dig three deep holes and dropped the concrete posts in. We positioned the new posts to help subdivide the larger gaps and also provide stronger support for the barrier. Fortunately, these old concrete posts were commercial ones and were over ten feet tall so we could bury them three feet down and also they had their original lumps of concrete foundations still on them, which all helps to anchor them very strongly. Finally, we ripped out the last wooden panel and wooden post as it was broken by the shifting soil and original barrier support mechanism which had rotted away.
The second day was spent constructing three horizontal wooden rails, cut to fit in between the posts, fitted into the slots and spaced 150mm below the a marked horizontal line (assisted using our laser level machine) for the bottom rail, then 300mm higher for the second rail and finally the third rail another 900mm up, to align with the top edge of the four feet wide OSB boards. We used “old” weathered 4.8metre CLS planks that we just got from our supplier (they had included these ten planks for free, one assumes to get rid of them!). These CLS timber are 63mm by 38mm thick. 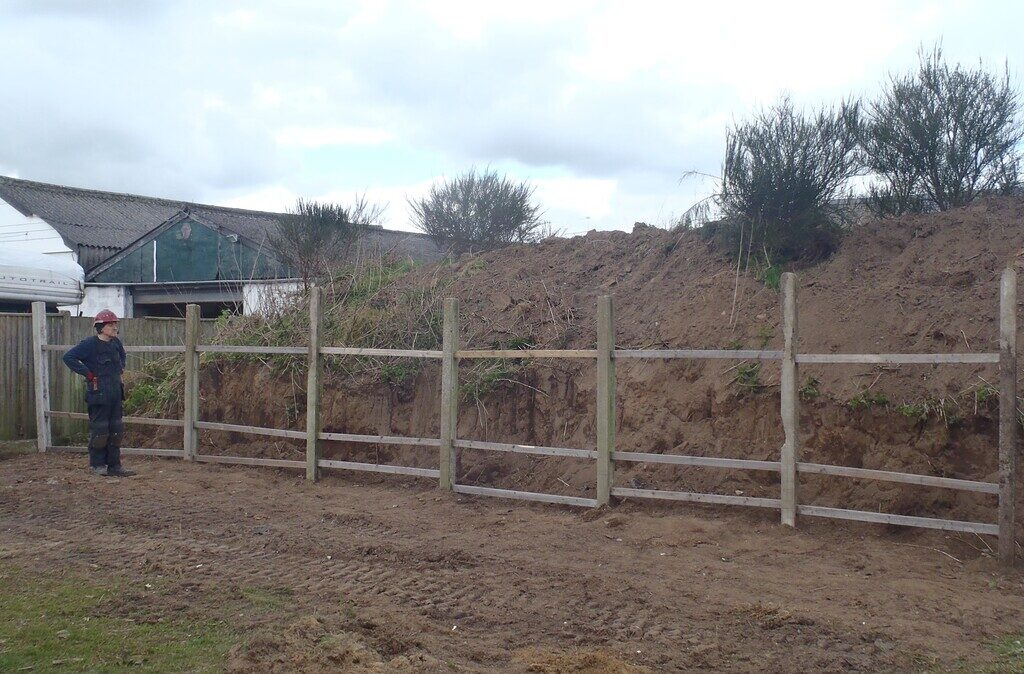 
Taking five sheets of 18mm thick OSB boards, we carefully sliced each vertical edge to follow the angle of each concrete post by measuring the offset from a true right angle (we used our trusty old 4feet builder’s homemade metal square tool) and proceeded to screw each piece into the back of the CLS wooden rails. We used the left-over OSB pieces together on the last section, the widest section (some 2620mm wide) and put on several pieces to fill the space. We had enough left over pieces in both CLS timber and OSB cut-offs that we could extend the fencing the other way (towards the Loke) and join to the existing wooden panelled fence.
Part of the final stages of building this new barrier, is to put on a layer of waterproof DPM plastic to protect the OSB from damp soil and extend the life of the whole structure, hopefully for the required two or three years. We had used more left-over material we had stored, like the final act of the day was to push in a line of cement panels, set vertically and pressing against the OSB and DPM plastic to provide a rot-proof bottom 300mm section and to stop the soil from creeping under the fence, including weeds and brambles. 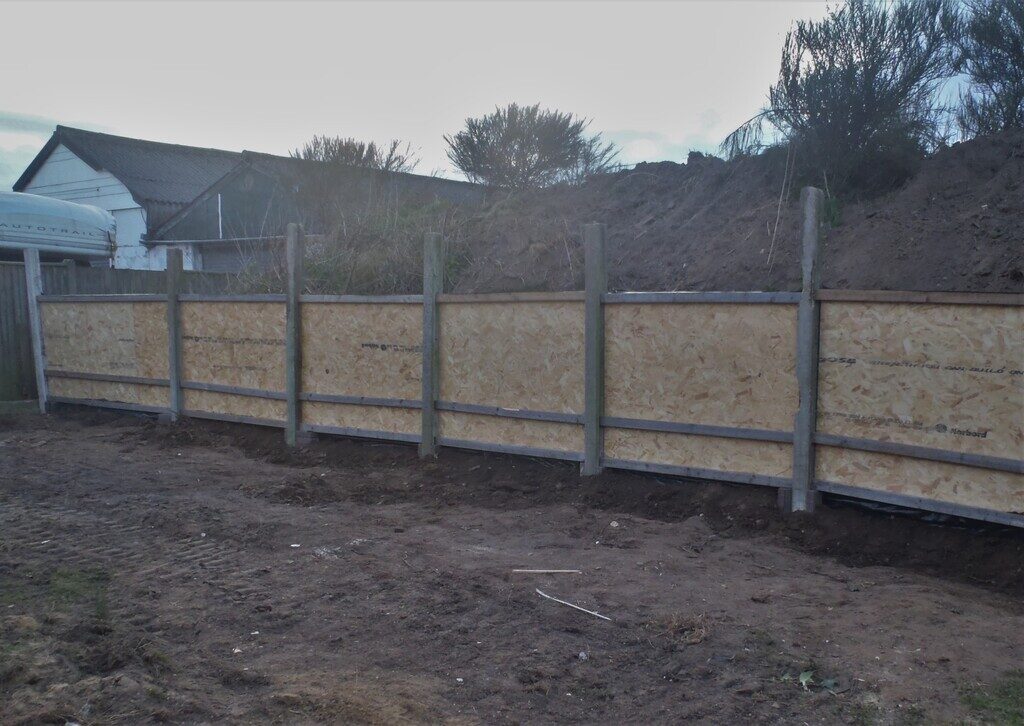 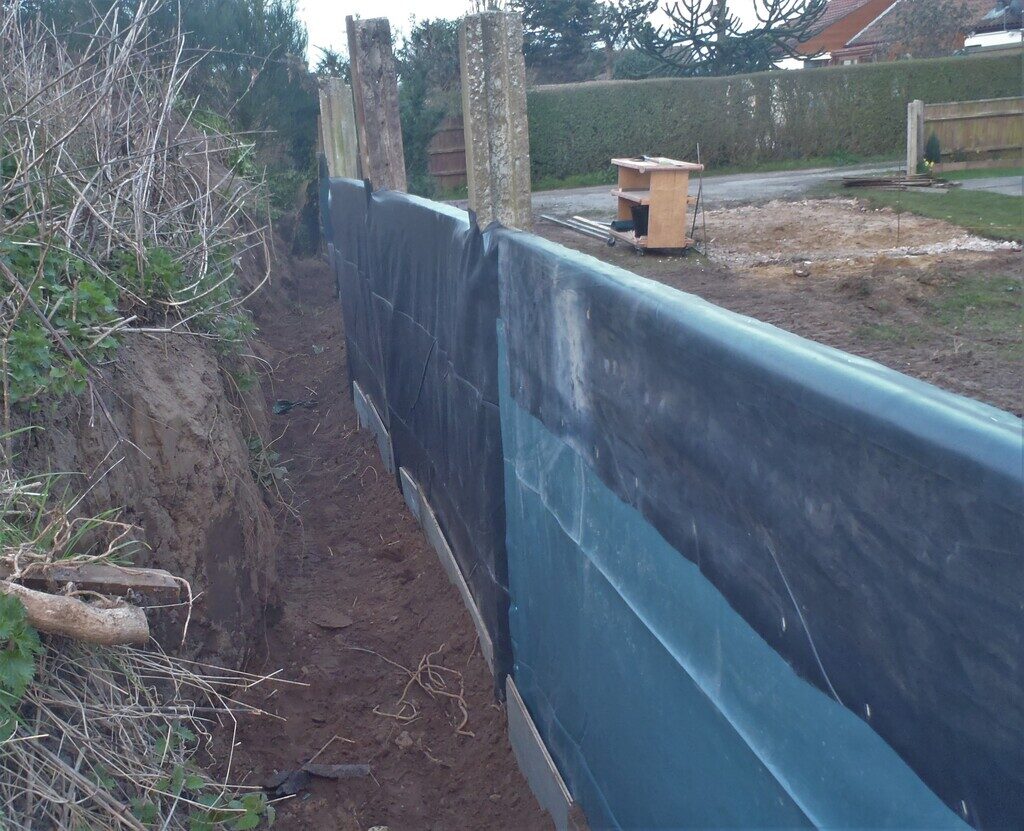 
The whole thing is over 12.5metres long, by 1200mm high (plus a bit! .. depending on what the ground level is), seven concrete posts, ten CLS planks and five sheets of our OSB material, with hardly any left-overs at all!