We carried on with the task of cutting and hauling up a whole series of Joists to form our First Floor structure. We had started at the back of the house over Bedroom 3 and its en-suite and worked across the building towards the middle, stopping at the metal Skylight legs. Here we had our very longest joists to put up next, nearly 11metres long, stretching from over the Cloakroom, a hallway, two cupboards and across Bedroom 3 to arrive at the external wall.
Then, the next task was to replace the C channel metal bar that went between leg 2 and leg 3 of the Skylight, and replaced it with a full sized LVL (it is like plywood but with no twisting of the layers) plank measuring 240mm high and 45mm thick and about 3.7m long. This was bolted back onto the metal legs with 12mm thick high tensile steel bolts and spiked connecting washers to help spread the load bearing forces. 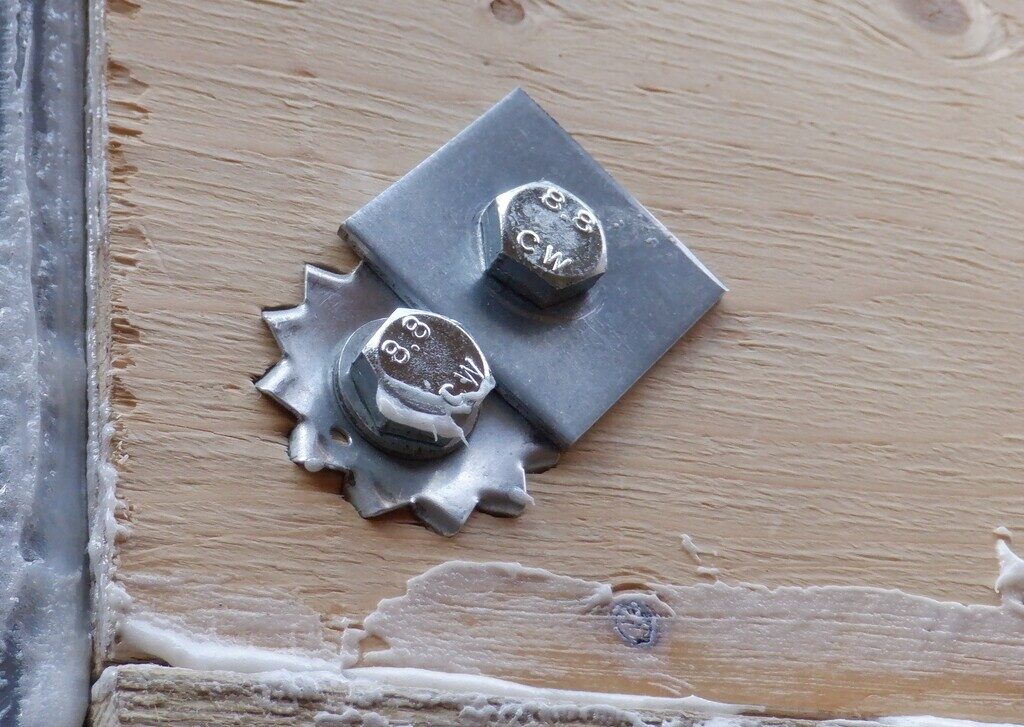 
This beam forms the top end of the staircase and we wanted to make it much easier to mount the various structural elements that makes up the framework around the staircase itself. It has a matching LVL plank running parallel but at the other end of the stair hole, just short of the main wall running along the front of the building that forms the kitchen and great room external walls.
Then a final piece of LVL plank was fitted between these other LVL pieces and this had eight joist metal brackets nailed at the 400mm spacing as per normal to allow the continuation of the joists going across the Entertainment Room and Utility Room. 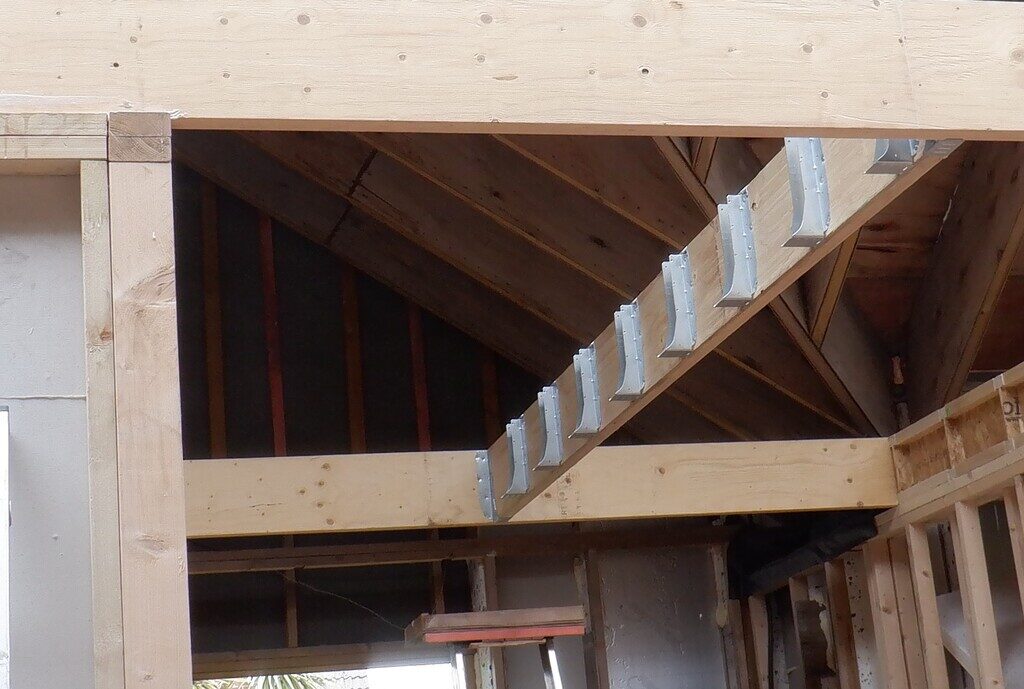 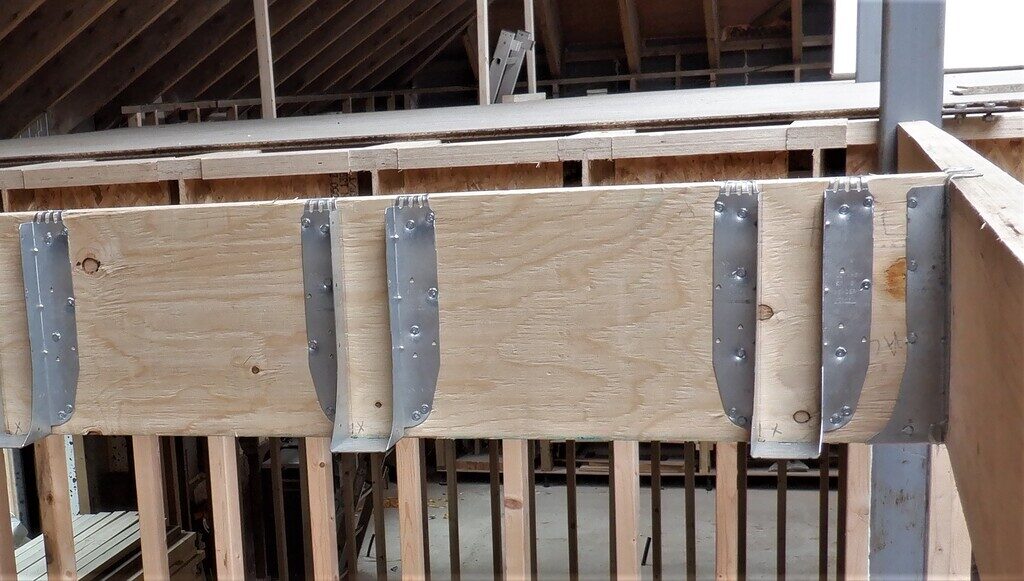 
After that, we carried on with the joists but starting from over the Front door this time and working forward to the metal legs of the skylight which was relatively easy and quick to do. 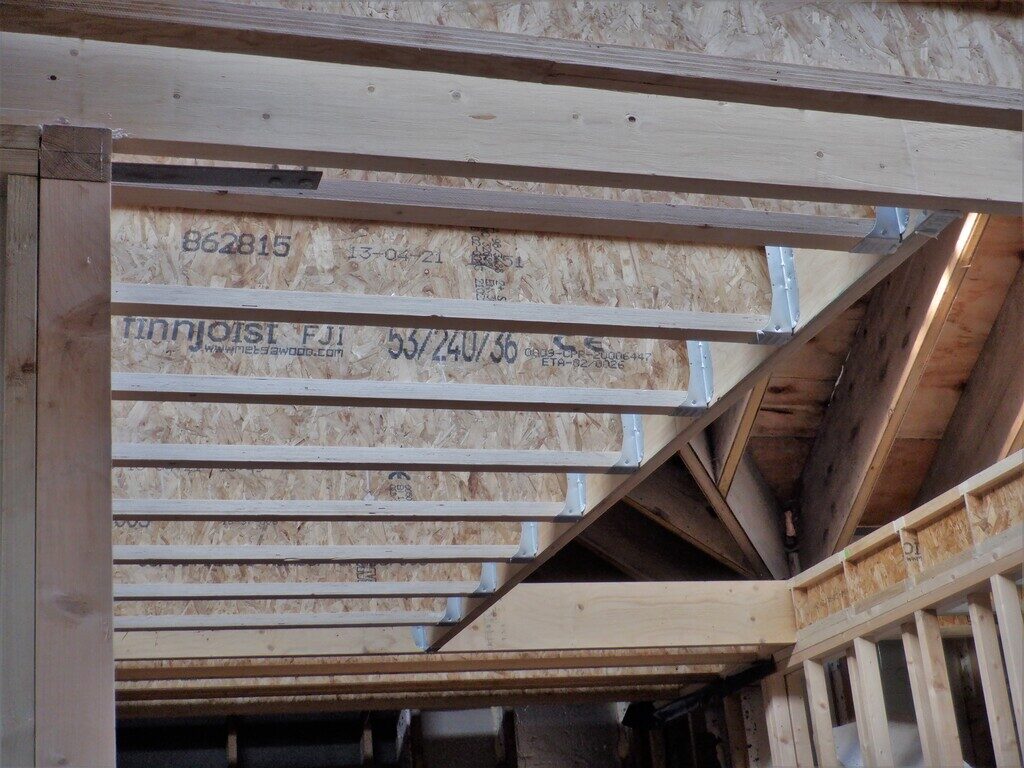 
This leaves just four more lines of joists to complete, in two sections, going down the hall way past the Entertainment Room towards the Utility and Bedroom 3 rooms and over to the outer wall. A final piece of LVL plank was cut and positioned stretching from the left side of the Tech cupboard to the Entertainment Room to help support the long unsupported span going along this hallway. This LVL plank had four more pairs of joist brackets put on both sides and we did the shorter pieces first, some 3.2 metres and got them installed with the usual glue and nails. We then cut the final four longer pieces, some 7.53metres long and instead of installing them into place, we hauled them up to the first floor and left them out of the way. 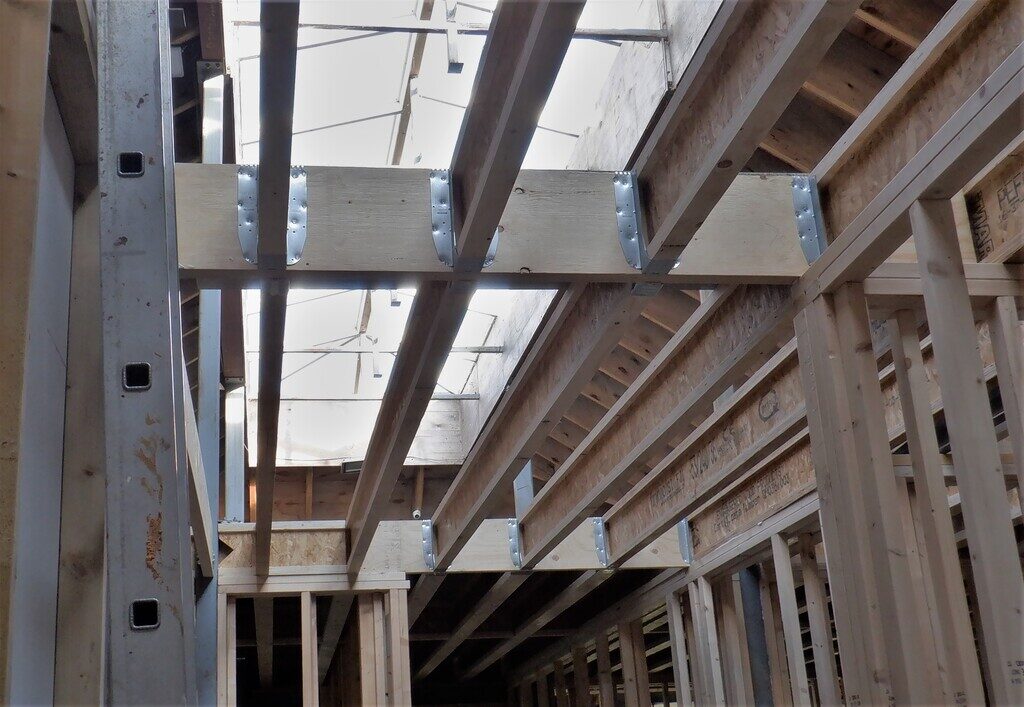 
This meant that we could finally finish off building the last few walls and doorways near the Utility Room. We had deliberately left this undone in May because we knew the task of bringing in these long Joists, would need the angles while approaching in from the side door and get pieces ranging from six metres up to eleven metres in, up and landed on the First Floor area and moved around the house as appropriate.
It will feel quite strange to having to leave the Utility Room through a proper doorway now.
We didn’t quite have enough time to properly glue and nail down the last four joists but they are in place now so we can safely say “We have Done all the Joists and All Fitted!!” 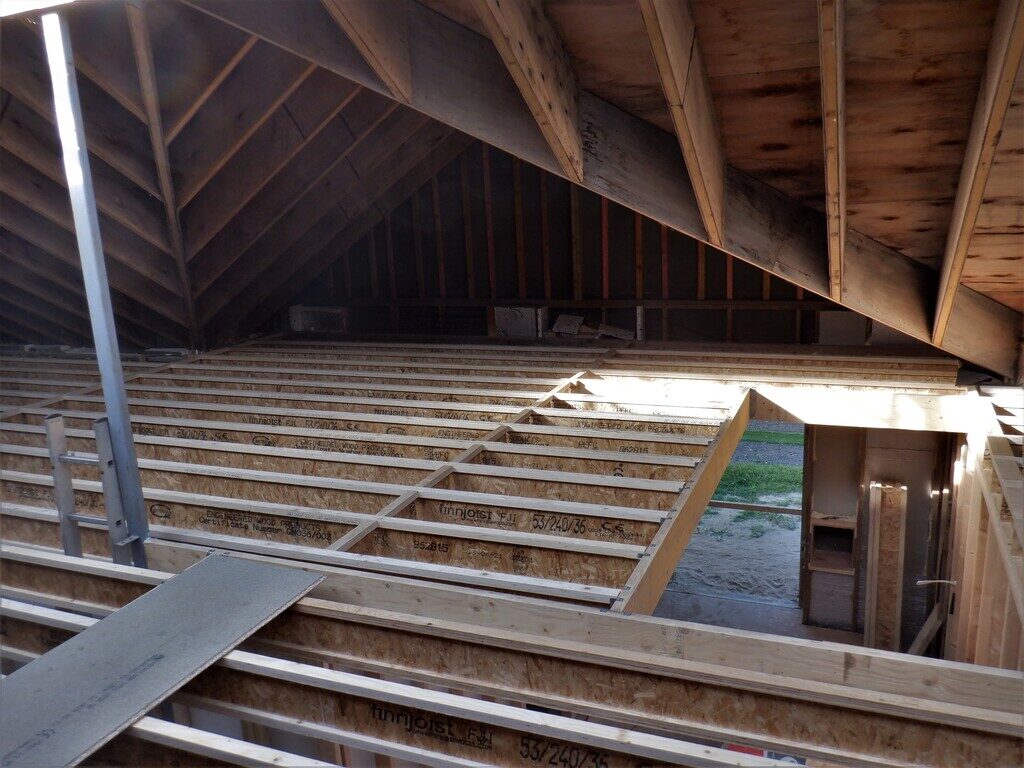 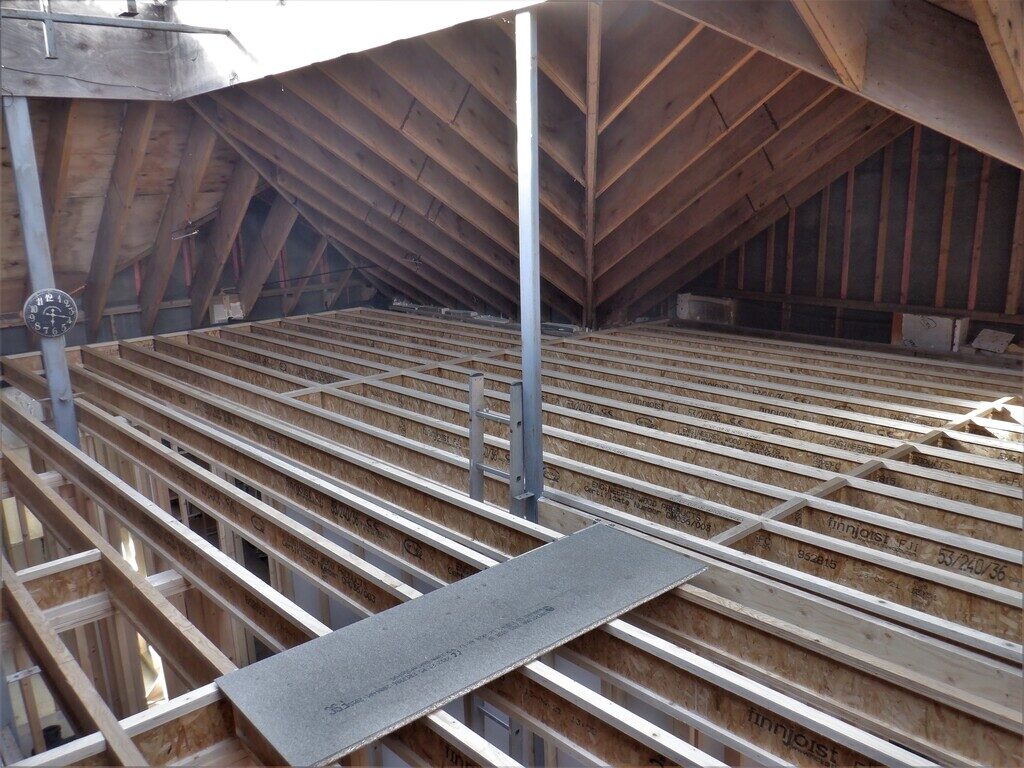 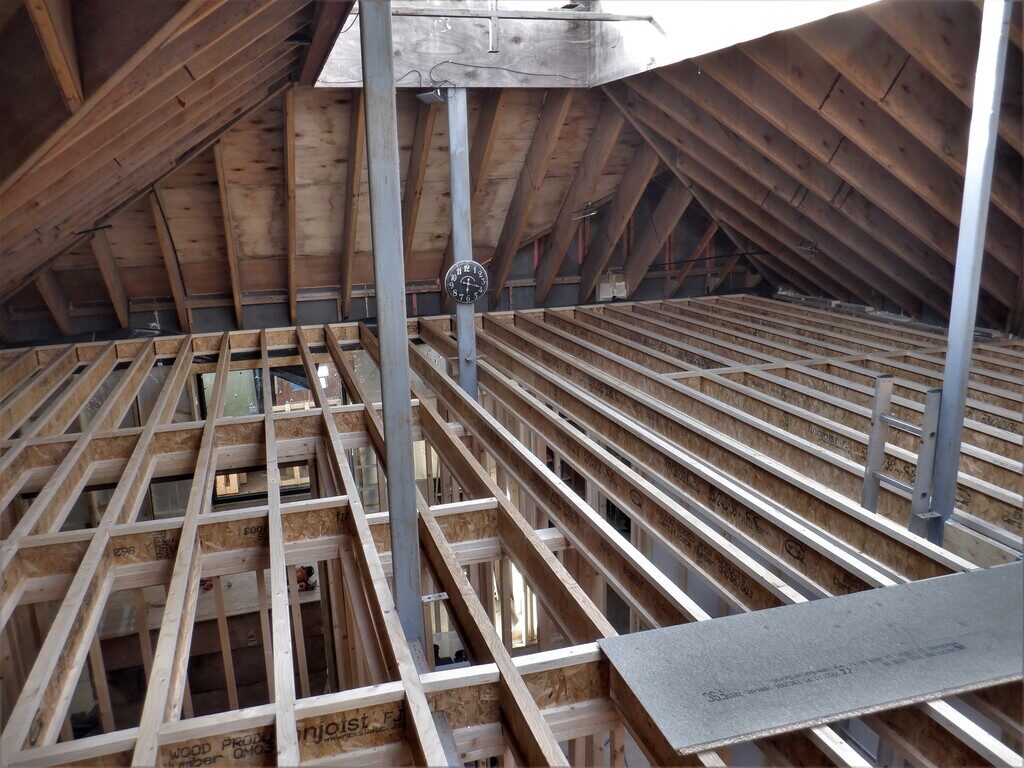 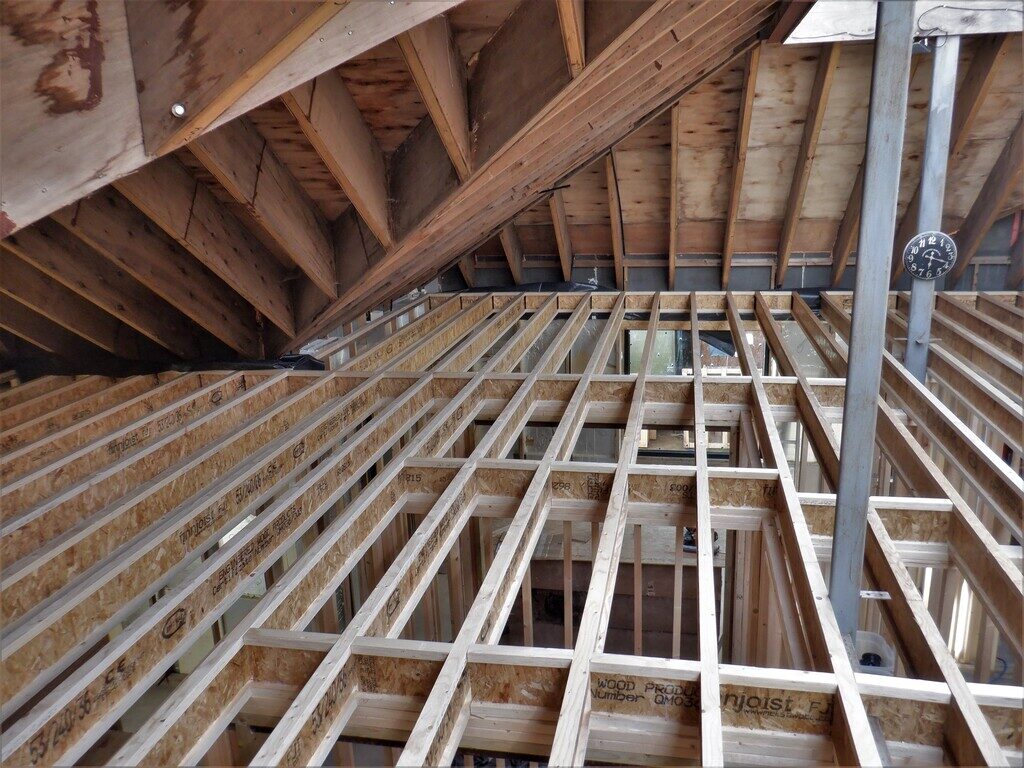 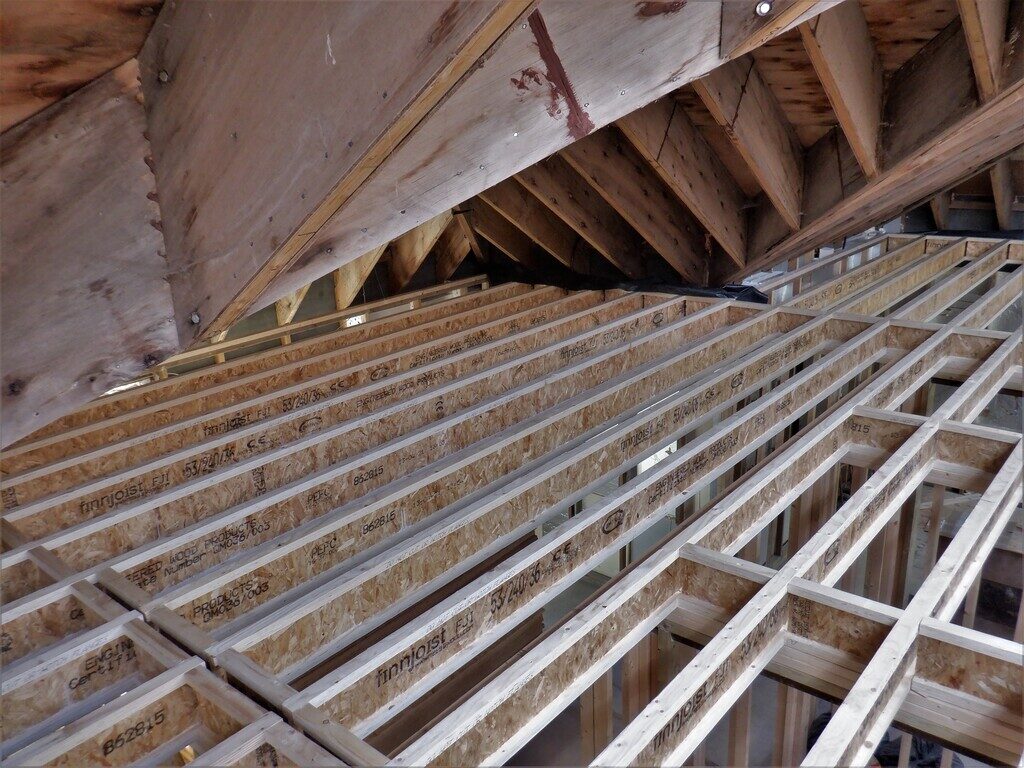 
But this is still not the end, we have to put in dozens of noggings in the middle of longer spans on all the I-Beams to help stiffen them against twisting and then put down some 120 sheets of floorboard, Phew!

Today, Tuesday the 8th of June, saw the arrival of two replacement triple glazing units, to swop out the defective windows. They had internal scratches between the layers of glass panes so it must have been caused during manufacturing processes, but a third window had a scratch on the outer surface and the glass people declined to swop that one out but on the other hand, did provide a small pot of glass polishing powder instead for us to polish the scratch away.
But before we could do any of this exchanging lark, we had to, on the previous day, work slowly and carefully to remove the oak beadings, four of them for each window and then unscrew the plastic brackets holding the glass unit in place. Next, we cut the security tape behind the glass and with the help of our neighbour and four large handles with suction cups managed to haul and man handle the very very heavy 117.93kg window (we found the weight on a label stuck on the edge of the unit!) and carefully got it onto our medium sized flat bed trolley we had adapted (again) to help hold and transport the glazing unit. 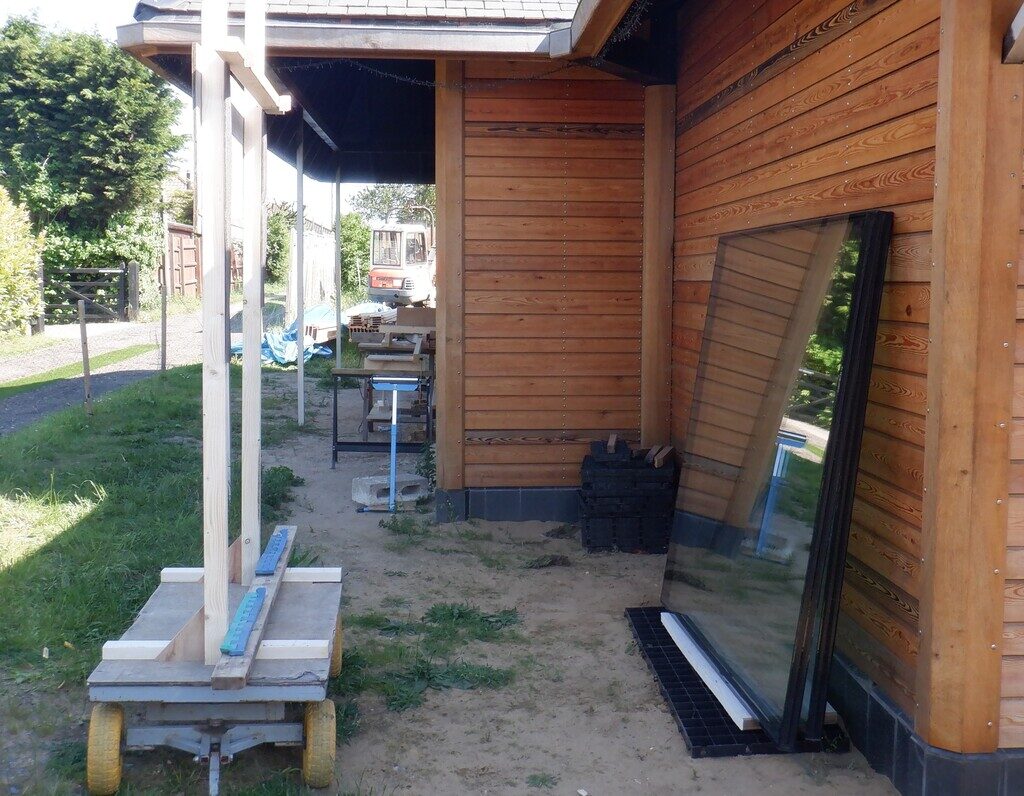 
We got the two units collected together near the driveway, ready for the van’s arrival.
Finally, we spent several more hours cleaning the glue and the remains of the tape off the metal frame and got it all clean. We stuck on a fresh line of double sided sticky security tape ready to pull off the wax protective strip when we are about to put in the new Glass on the morrow.

So this brings us to today, when the van arrived just after 9am (scheduled for after 10am) and we hastily got our worksuits on, grabbed our neighbour again and got the two new glazing units off the van, parked on up against the wall on a pallet and then loaded the old ones back into the van for them to take away and one assume that they will analyse the glass panes for their mistakes back at the factory.
Finally, we moved each of the new units to their window holes, reversing the process, with lots of grunts and managed to slip them home and stick them back onto the uncovered security tape. We secured all the plastic brackets back into place again and reattached the Oak beadings back on. 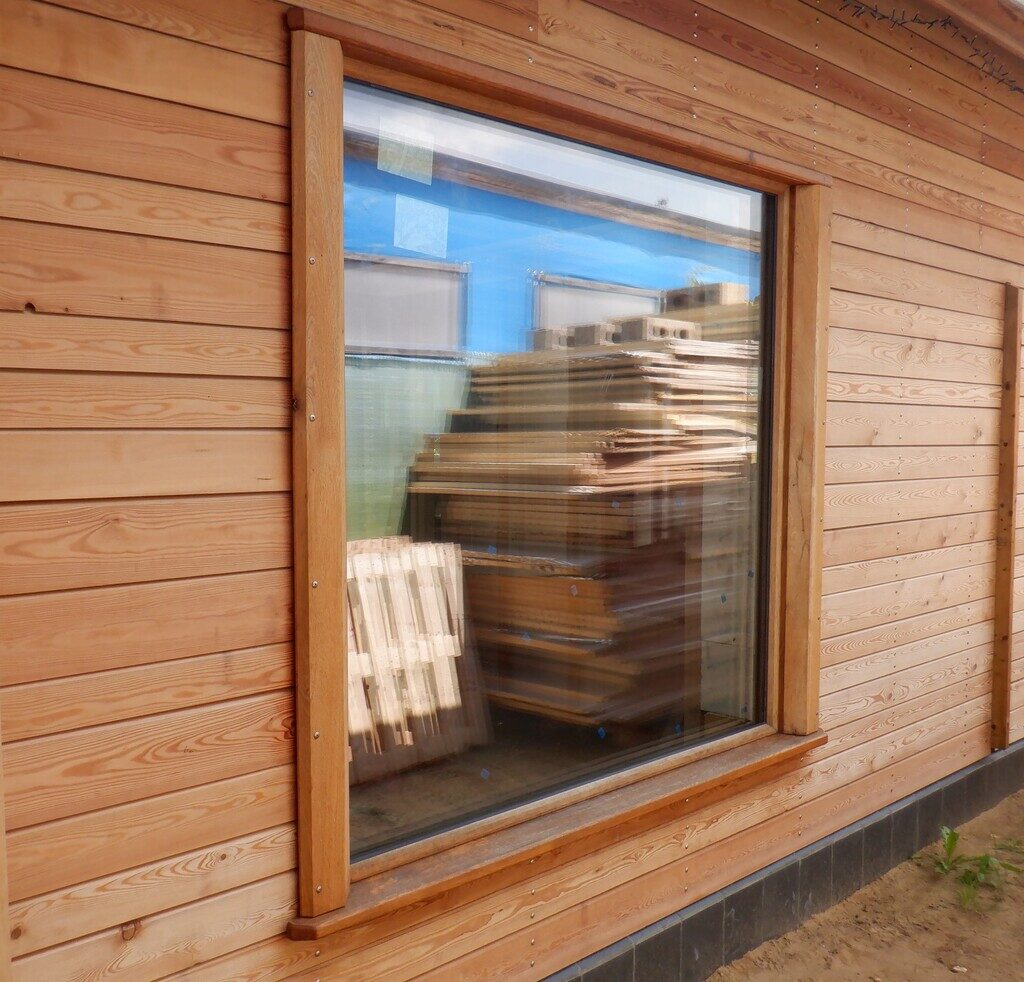 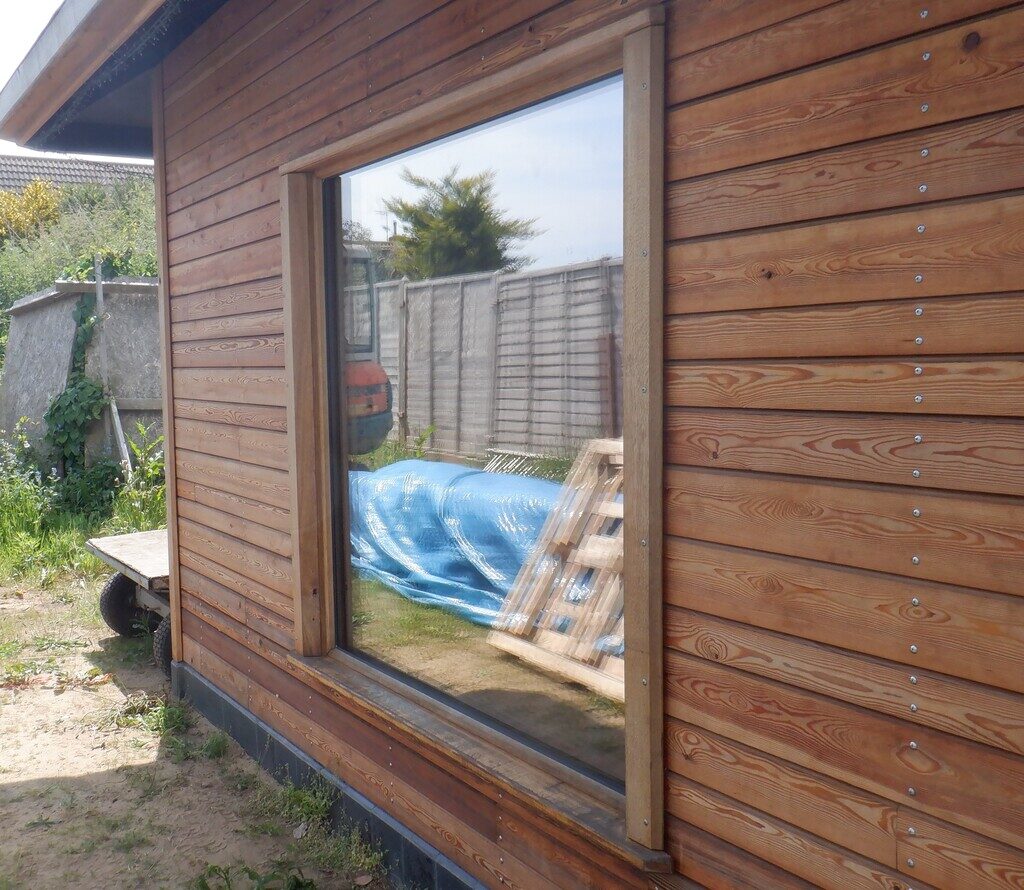 
The third window with the scratch on the outside (we don’t thick we scratched it) we did after lunch. 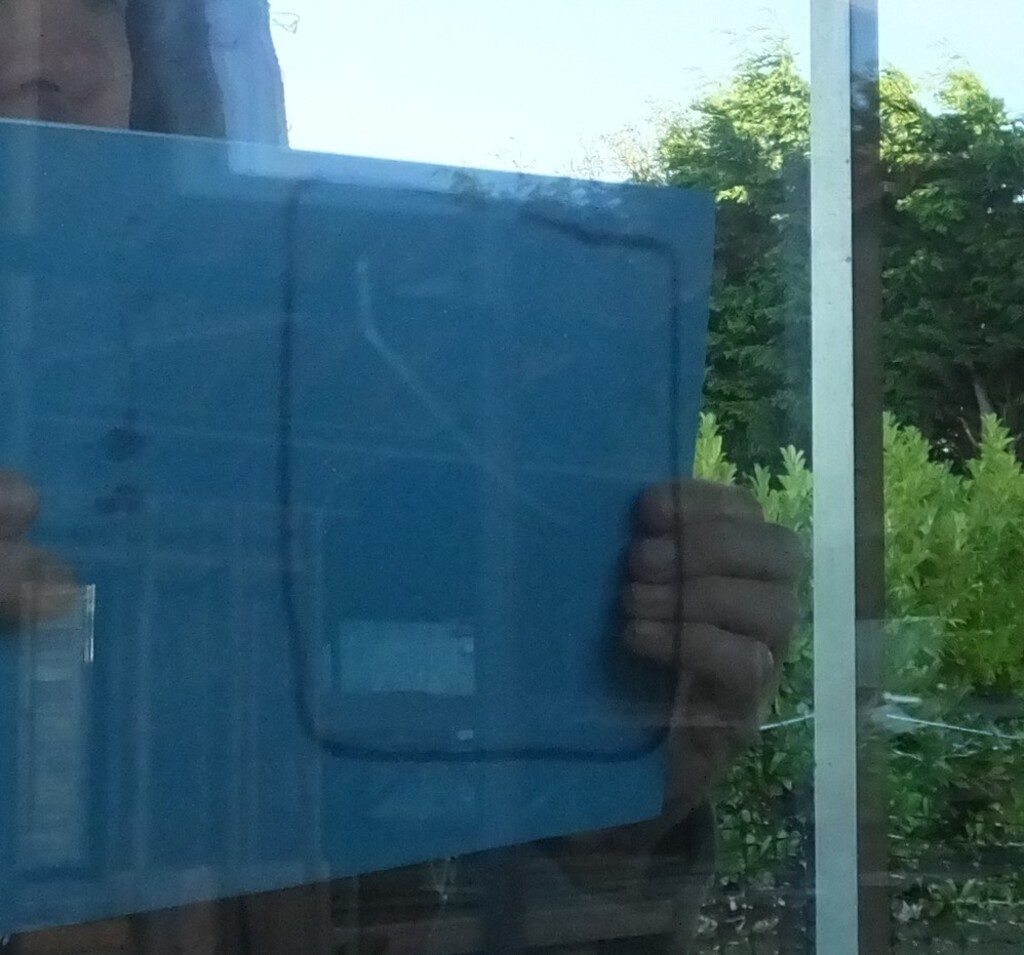 
We made a thick creamy paste of the cerium oxide polishing powder and dabbed the mixture onto a pre-soaked cloth wheel, fitted it to our electric drill and carefully buffed the scratch for about 30 minutes in total, stopping many times to spray the glass with water to cool the temperature down as much as possible, to avoid creating heat stresses and shattering the glass. We can’t show you the result because it’s not visible (grin)…

So this draws to the conclusion of our windows story, stretching back to last October, just over seven months ago when it all first started!! It got dragged out because of the Covid Saga! Phew!

We carried on from last week in installing the joists for the First Floor. We glued and nailed the section over Bedroom 1 and then moved on to tackle the section over the Kitchen and the Hall in between these two rooms. Before we did the Hallway, we cut a chunk off the LVL solid […]

We have started the process of installing the joists for the First Floor. The last two and half days were spent on several tasks, like for example, marking out on top of all the structural walls running from the front to back of the house, with 400mm centres for each joist. We used our new […]

This morning and yesterday were spent on repairing the broken wall and repainting the street sign for our Loke after the delivery lorry with our I-Beams had misjudged things and knocked into the curved brick wall at the entrance of our Loke on the main road. Yesterday, we managed to pick up the pieces and […]

In the morning we prepared an area to store the beams next to the house. The lorry arrived at 1:25pm with the 66 special I-Beams on a open flatbed vehicle, in two packs covered in plastic. The driver thought he could reverse down our Loke and save a lot of effort but after attempting to […]

Monday is the big day with the arrival of 66 special timber I-Beams, the last three days have been spent preparing for this happy day. So, we adapted our large flat bed trolley to help the job of transferring the very long I-Beams down the Loke from the main road. They come in a range […]

The other piece of equipment we made while we waited for this day, was to build a special chop saw table to cope with slicing these I-Beams. Their physical size, especially the biggest one is 96mm wide (the flanges) and 240mm high. No standard chop saw, or even mobile saws, have enough depth of cut […]

At the beginning of the three weeks waiting for the arrival of our First Floor Joists, we sat down to analyse all requirements of providing connections to the outside world like electricity, data, water and waste services. We looked at the underground situation as well as the Eves too. We wanted to make sure that […]

Our Glass Wool insulation we ordered last week has arrived today. The delivery truck parked in our local Tesco Express (after asking the staff inside the shop for permissions) and came down to confirm that we were expecting this order. There were three pallets plus two loose packets. But fortunately, he had his own diesel […]