We had a delivery from UK-Mail today and the driver hit our fence post and snapped it off! He appeared to hit the post and break it off as well as flattening a few road cones placed by the fence to warn drivers that it was there! We have contacted UK Mail and will wait […]

At about 4:30pm, on a cooling afternoon but still lovely sunshine, we had a bit of a disaster! We were moving the scaffolding tower to its new position to install some more rafters into the “P” section of the roof over the Great Room. The problem was that while moving the tower, it had picked […]

While climbing up the ladder on the second scaffolding tower, the tower suddenly moved along on its wheels and the ladder began to slip off the metal rail, starting to crash back down to the ground. Stephen grabbed the scaffolding tower itself and managed to save himself but in the process, banged his lower legs […]

Well that’s one for Storm Doris! She has caused the 5 metre wooden pole holding the TV aerial and weather station to SNAP! It came down across the roof of our garage with one loud thump!! It made a little hole in our rubber membrane in one spot where the metal aerial frame jabbed in and […]

We were working on the 2nd energy module and digging the hole for it, when Shaun managed to do it again! see the full report at Number 2 Modules Hole is Dug 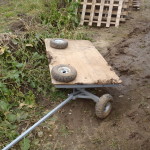 OOPS! The dumper truck has just ran over our poor little platform trolley! We were reversing the truck to gain room and straighten up, in order to move the load of concrete blocks that has been sitting in the skip for the last few days. We had been using the mini trolley to transport a […] 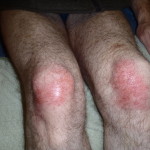 While we were laying the concrete, we were occasionally kneeling on the wet concrete. Shaun was working on a particularly wet part and the concrete soaked through his knee pads (which are pretty much waterproof in normal usage). The concrete is quite alkaline and over time burned Shaun’s skin over his knee’s. He noticed they […] We had a bit of a disaster today when the rain came and came and came! It was one of those 10 year events of massive amount of water over hours and hours of rain, rain, rain! We weren’t actually flooded out, nor anywhere near that point (ever since we have installed a whole line […] 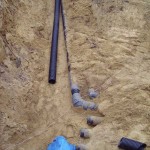 Shaun was digging near the wall of the pit and a large section collpased on him. He was buried up his waist! But that was on 300mm deep as he was kneeling!

It’s been a few days since I nailed Shaun’s finger and its healing nicely. Shaun says it doesn’t hurt any more… There is no infection at all! But we have decided we all get Tetanus Jabs as a precaution, as I doubt that this is the last accident on site.