We started our new week in the workshop to continue developing the scorching machine. We decided to completely dismantle our first version and start over again. Using our new found knowledge and ideas, we put together a new cleaner version and got the two input and output rollers mounted and ready to be connected to drive motors (which are on order). 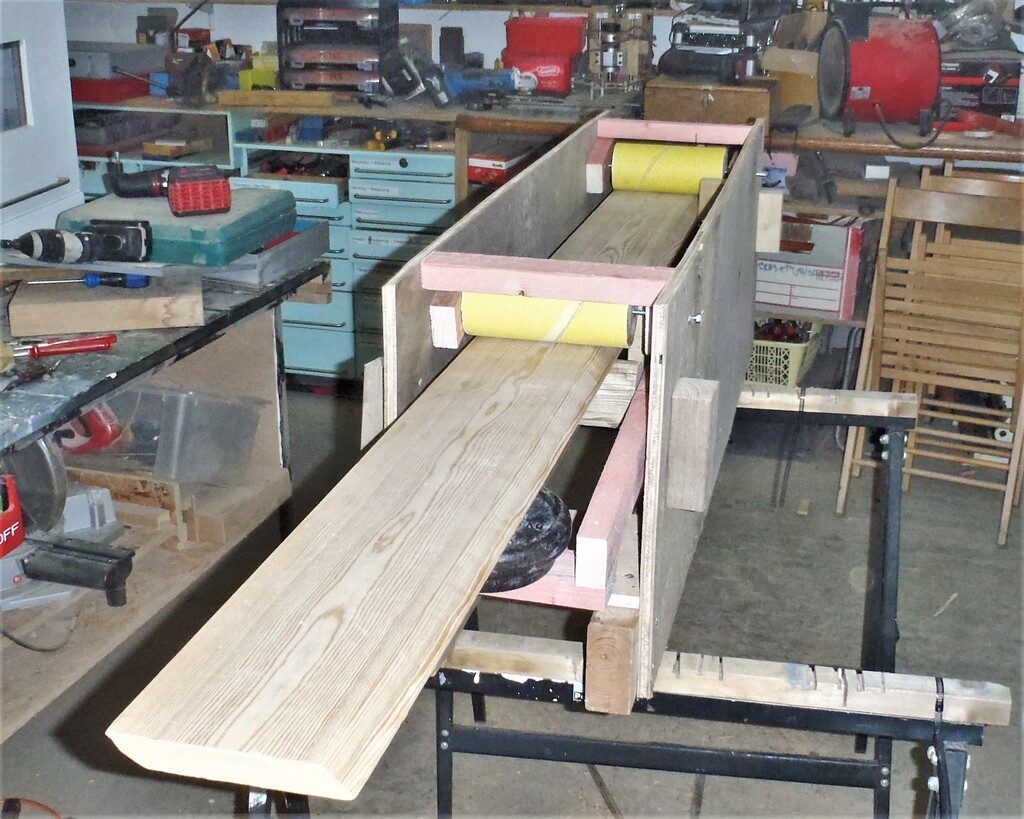 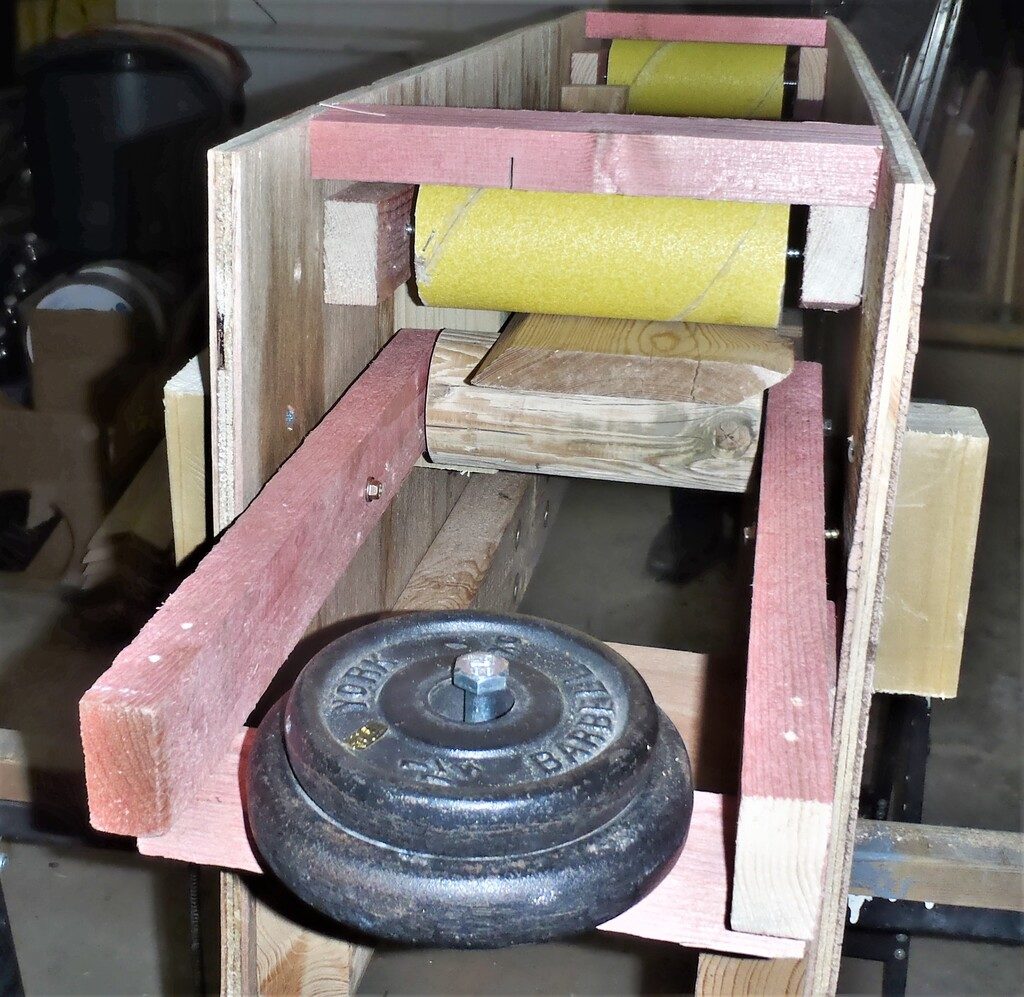 
Then we got our four gas flame torches and connected new pieces of hose and reconnected back to the gas tank and did some burning test to see how the flame came out of each fan like spreader, to ensure that we would be burning the total width of the wood passing under the flames. But unfortunately, one of the four torches is of a different manufacturer and it behaves a little differently. Also we think that one of the fan spreaders is mixed up with the odd one out and the flame shape is different and not producing a same result.

The following day, Tuesday, had a small interruption (the septic tank was serviced and emptied), we resumed on looking at the gas torches and started analysing each flame pattern, swopping parts around, comparing the results and concluded that there are subtle differences in the manufacturer’s output. We were able to improve one of the torches by expanding the air holes in the gas mixing chamber and increased the oxygen supply to get the flame much more bluer and more powerful. But doing the same trick to the other ‘poorer’ torch didn’t have the same desired effects. Under the magnifying glass, we could see on the brass nozzle injector, that the tiny little hole (less than 0.3mm in diameter) were not consistently centred and perhaps not even straight. But we decided that three were producing a good strong flame and with the spreaders, they will do the bulk of scorching the large area of the Larch timber and the fourth torch with the weaker flame will do the angled edge instead.
So rebuilding four individual torch mounting blocks, and putting them on to a piece of plywood, we took it over to our plank moving mechanism and fixed it at an angle of about 30 degrees downwards so the flame would attack the surface of the Larch as it goes pass. 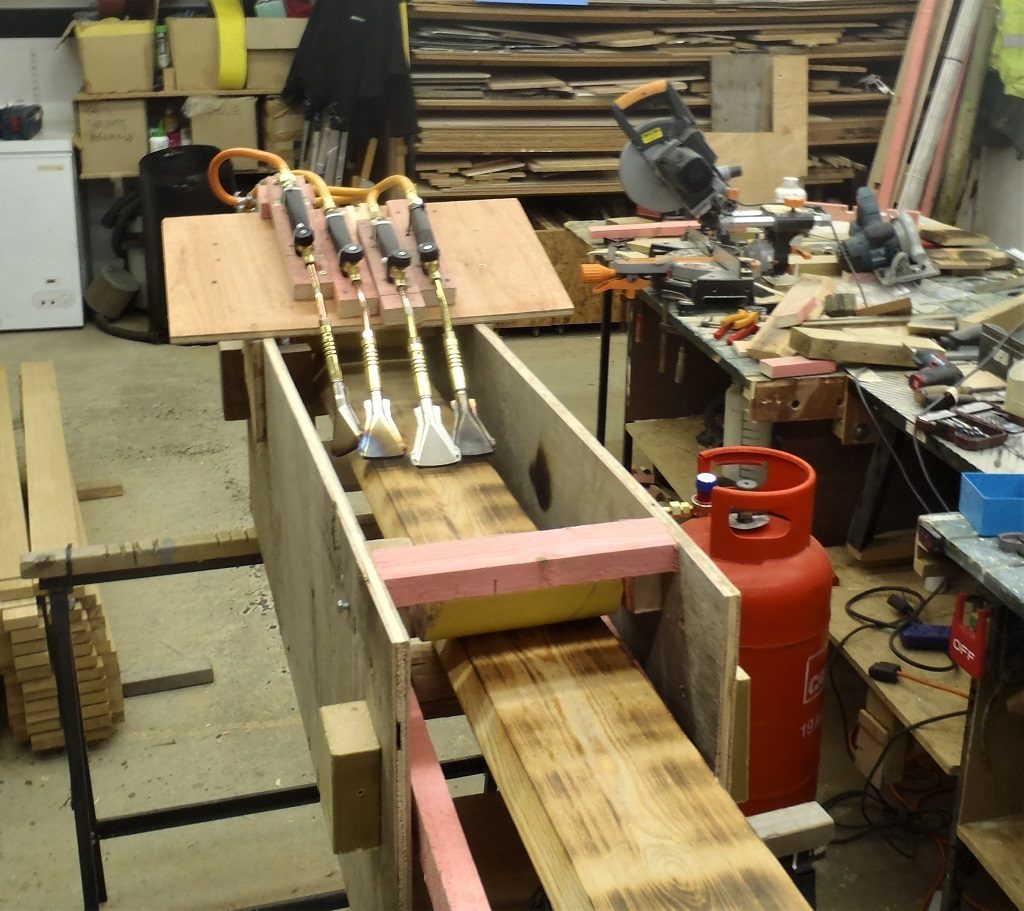 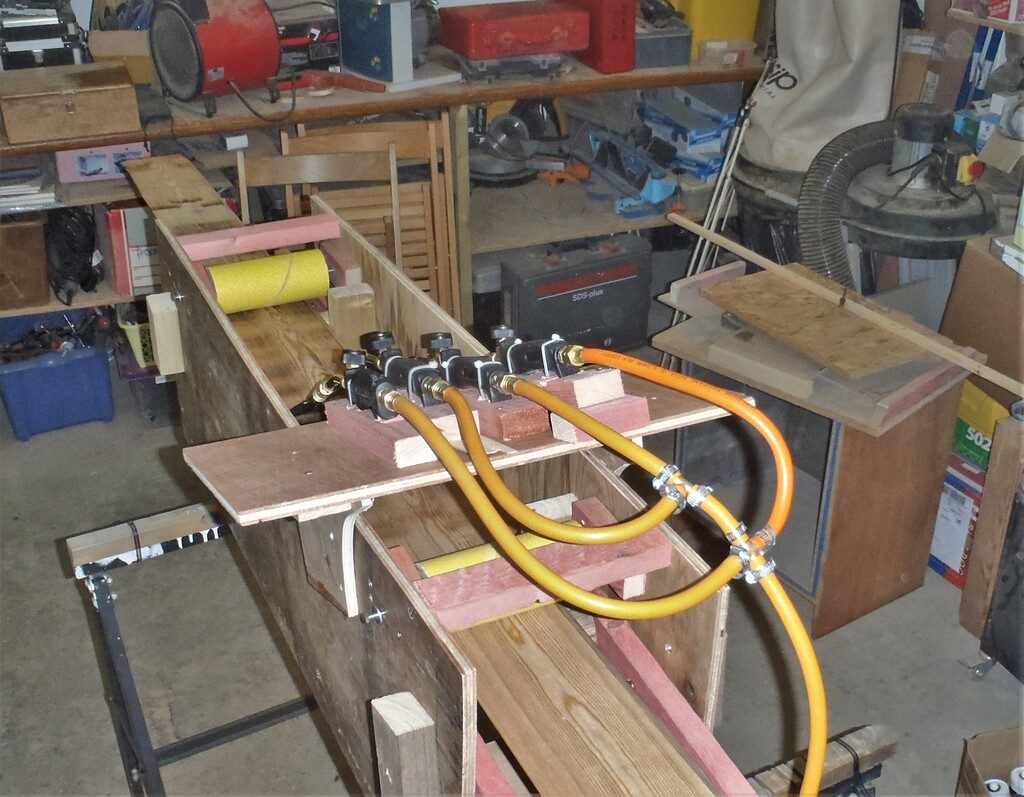 
This is as much as we can do at this stage, because we need the motors we got on order, to help control the movement of the plank through the flames to get a consistent scorching effect. Our test run we did today was just by pushing the Larch through by hand and it was quite obvious in how the burnt surface varied along the plank. We also noticed that the middle torch burner wasn’t as effective as the other two neighbouring ones and therefore there was a paler strip being generated down the middle. We will have to make some adjustment later on when the motors arrives.

For the remaining of the day, after tidying up the workshop, we got back to preparing our new windows. We got all our aluminium strips in from our storage rack, and started slicing them up into all the required lengths to make up the twelve windows frames we are going to make. We made nine 1612mm lengths and twenty-four 1637mm lengths.

On the Wednesday, we discovered that the weather was very calm and actually reasonably warm (at 10°C!!) so we switched tasks and got on with doing the second coat of the black acrylic paint under our Eves. The two Porches got their first coat and that used up our second 5litre tin of paint! A quick trip out to the local DIY store and bought our third tin and used half of it going around all the Eves, making sure that we now got a solid black coverage. We even did the boxing that makes up the Downpipe Channels. 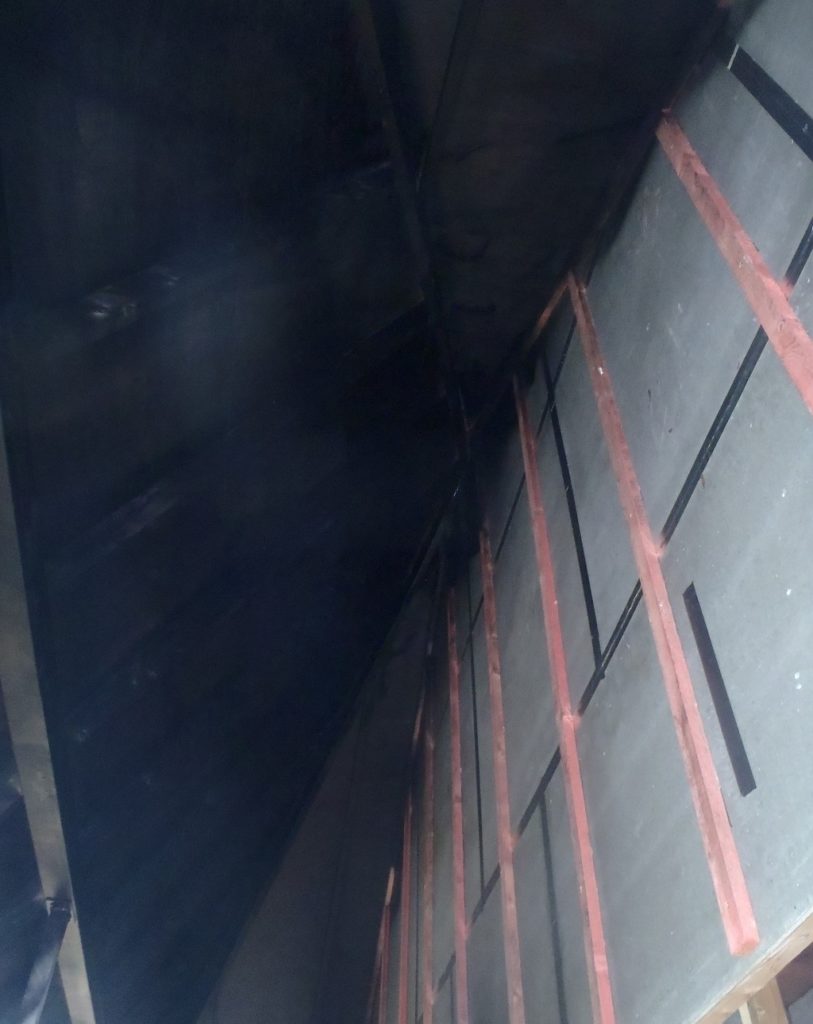 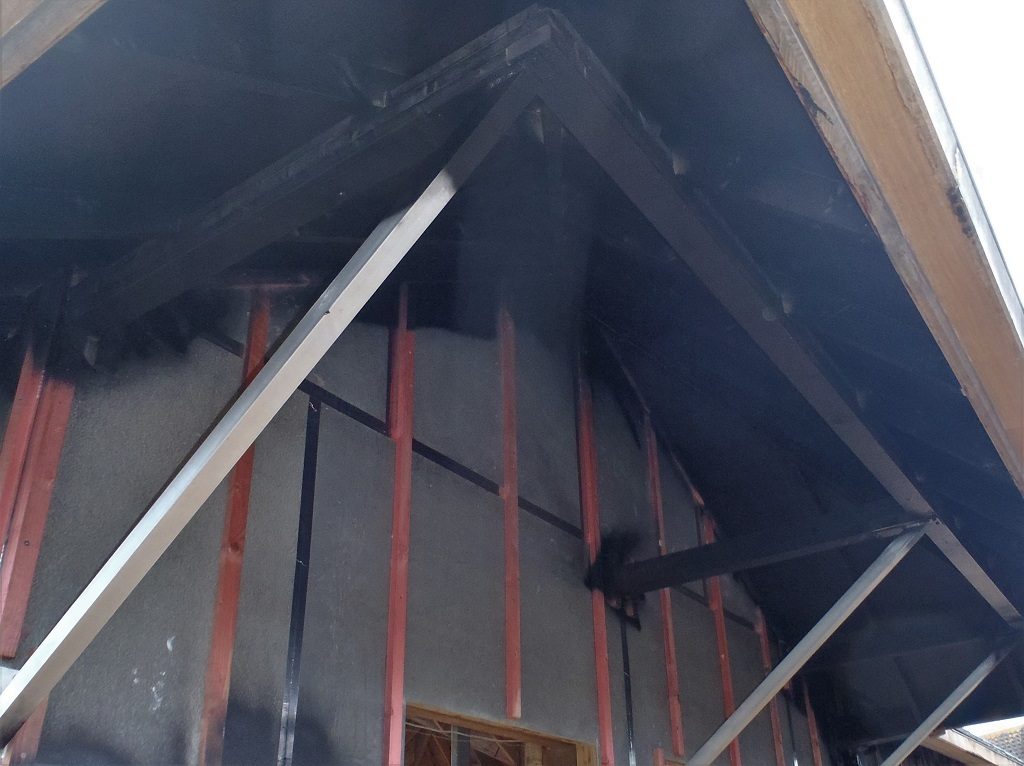 
To finish off the remaining paint, we painted our two temporary doors (the side door and the front door) and they are both now black.

The for the rest of the day, we were back in the workshop to finish slicing up the aluminium strips into their required lengths, a further nine pieces of 1707mm long, two lengths of 1097mm, two lengths of 1002mm and finally, a 900mm and 805mm pieces to finish off.
Then the drilling operation got going; making 3.5mm holes with a countersink, spaced apart by 160mm and 7mm off from the edge. 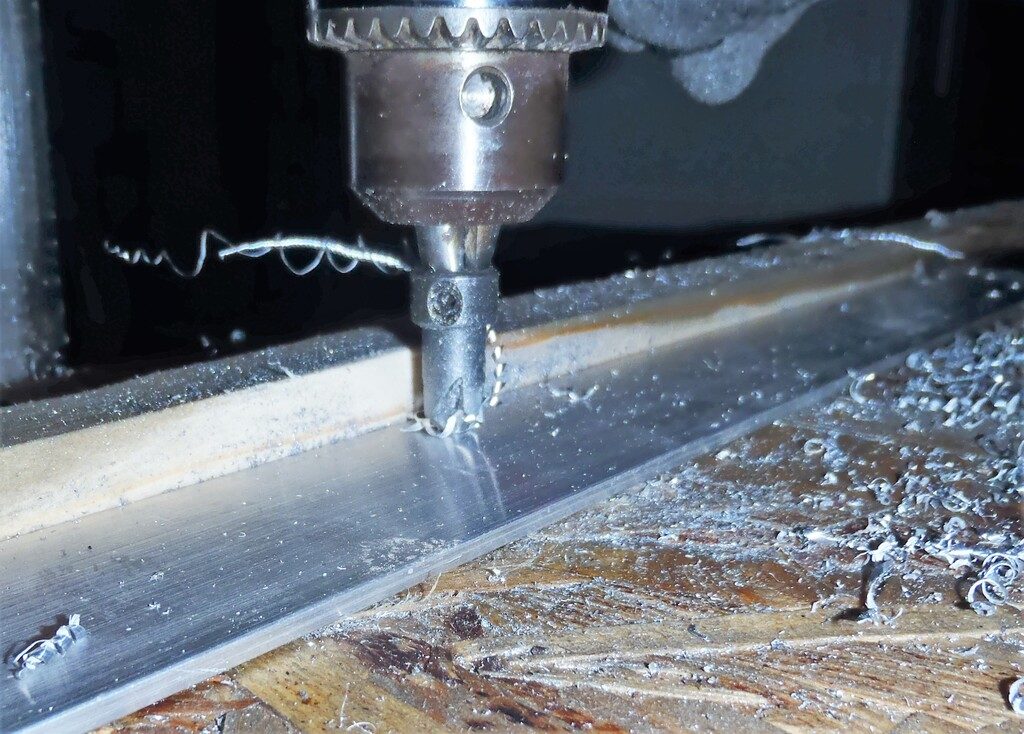 
We got through all 48 strips, drilling over 600 holes in total. All the holes were cleaned with a deburring tool and any sharp ends were filed off. 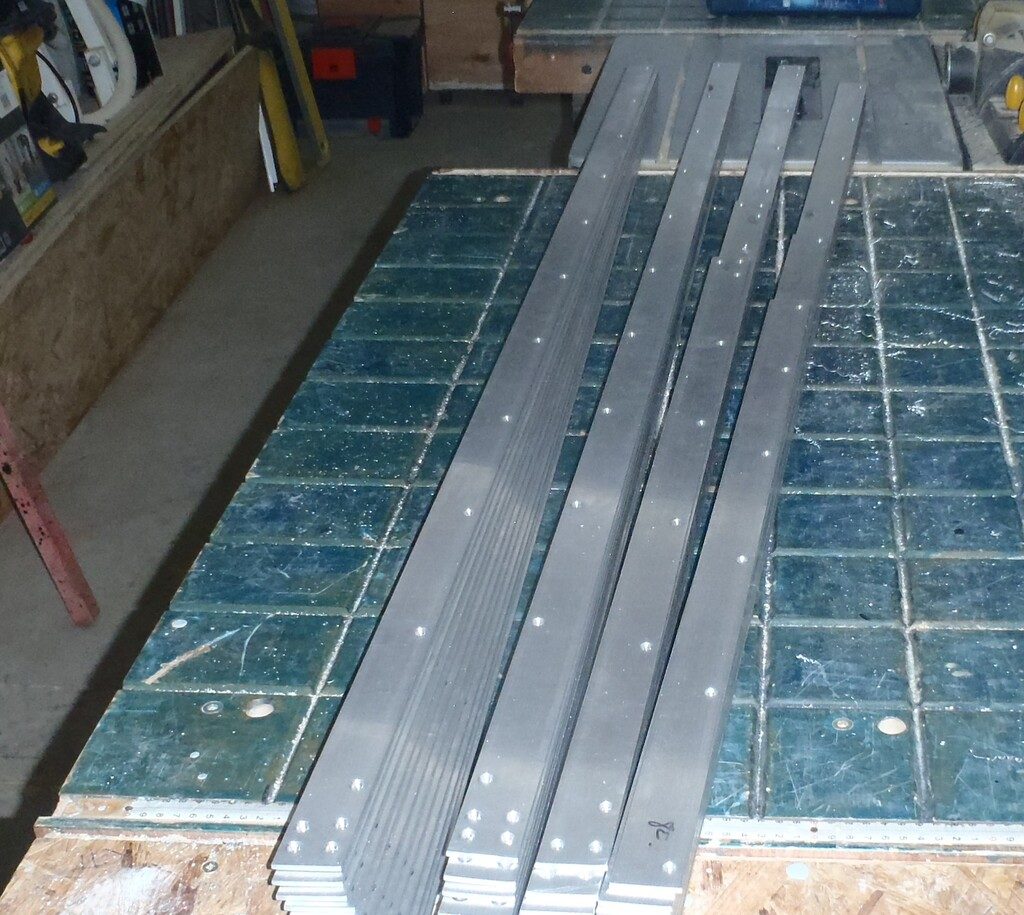 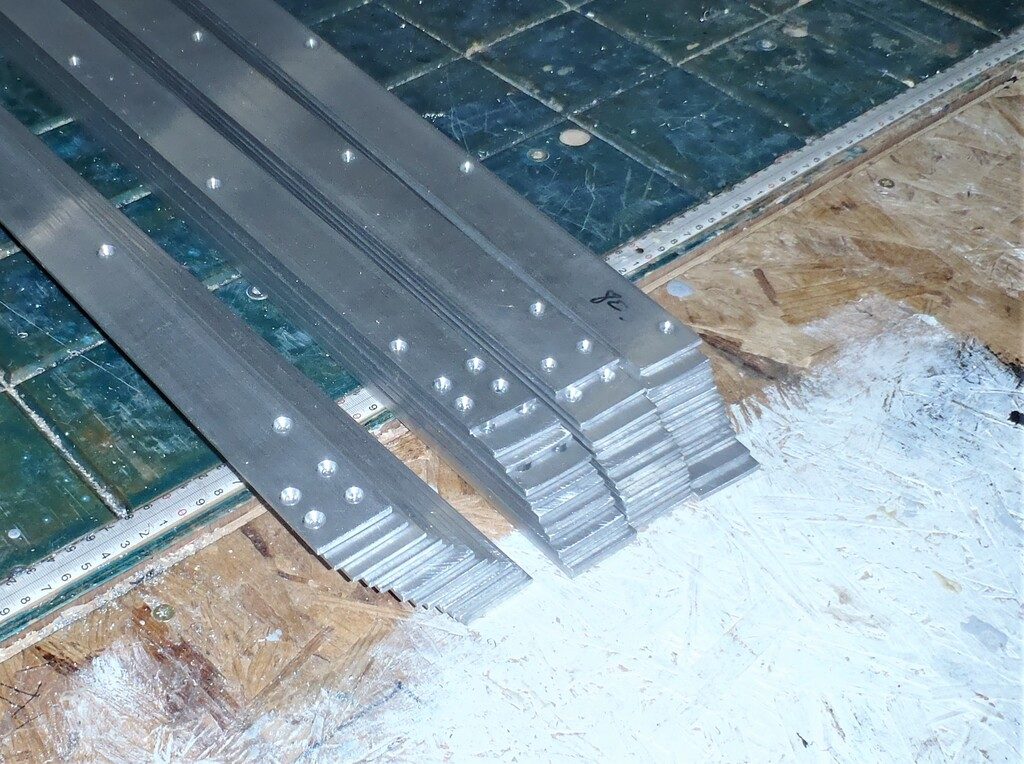 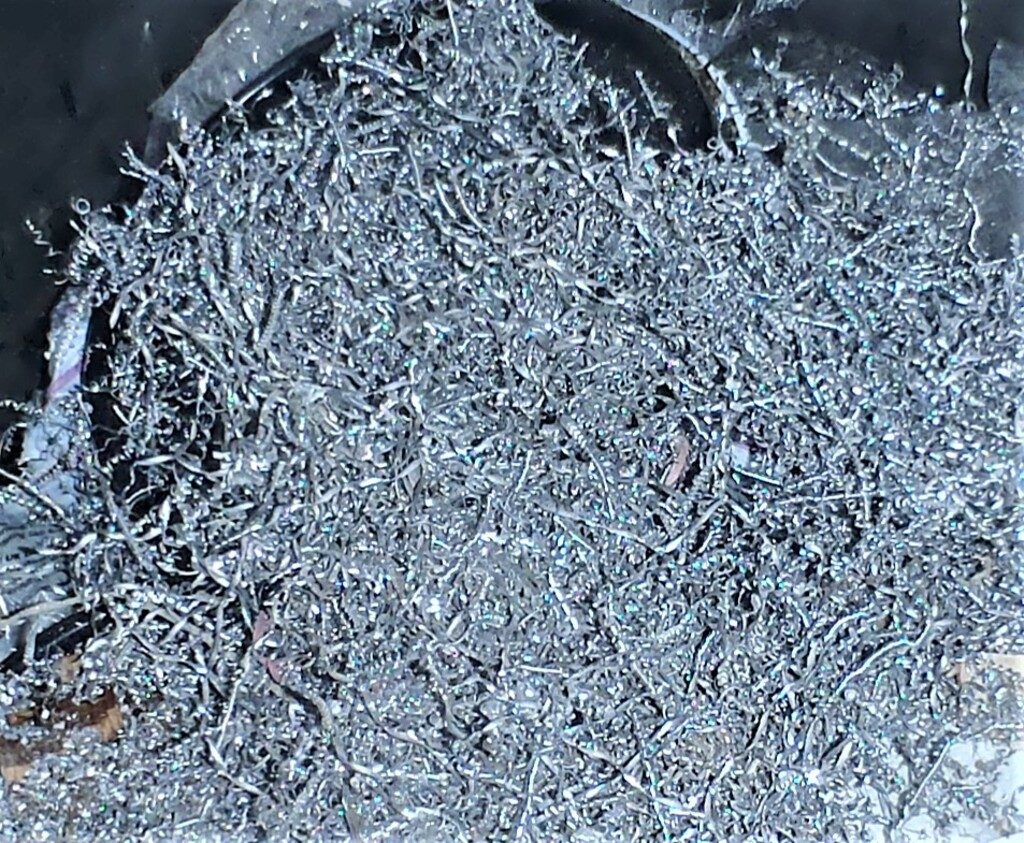 The next job was to recalibrate our template module that guides our router machines along the vertical Oak side of the window frames, putting in T slots. Our prototype window revealed that we had a slight misalignment between the left and the right sides and yes indeed, we could detect a difference to where the ‘end blocks’ were located. So we adjusted those by a tiny bit (0.75 mm or 1/32″ !!) and now the two ends are balanced.

We did all one side first, twelve of them, double checking that the timber piece went in the correct way around and proceeded to cut five T slots in each piece.
Then got all the other twelve pieces done with their T slot cut too. 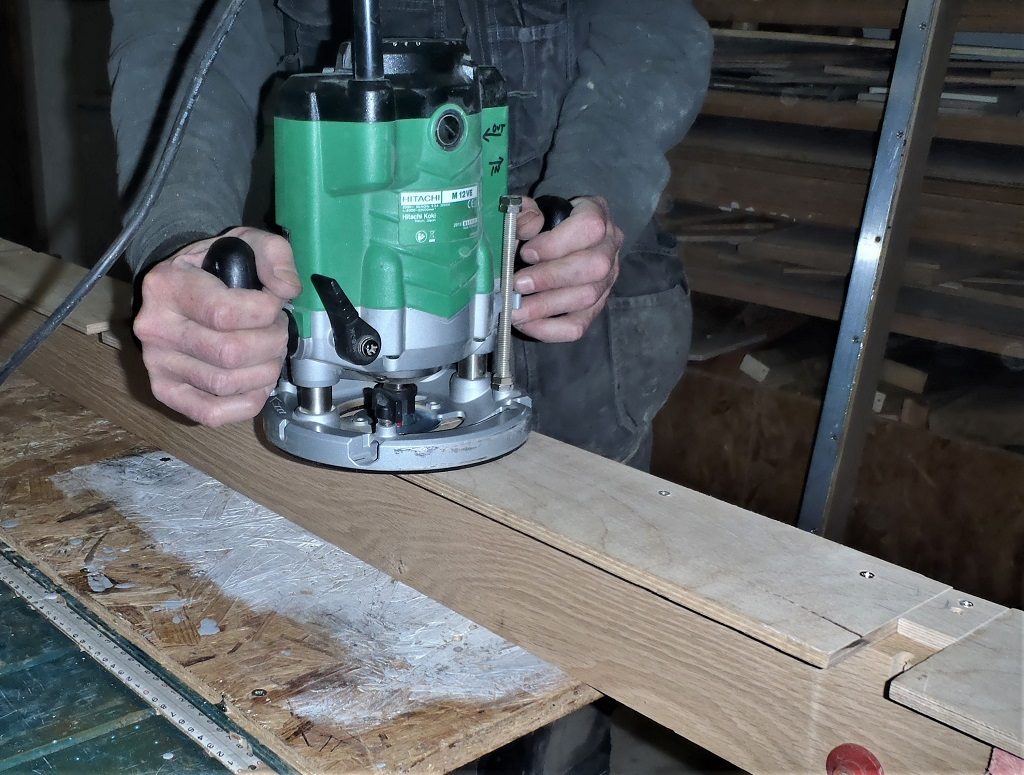 The next job was to wash all the metal strips, all 48 pieces, with hot soapy water to remove the coating of the drilling coolant solution (the kitchen got rather wet, all over the floor and worktop!) so the glue will work at maximum strength, adhering to the oak timber. 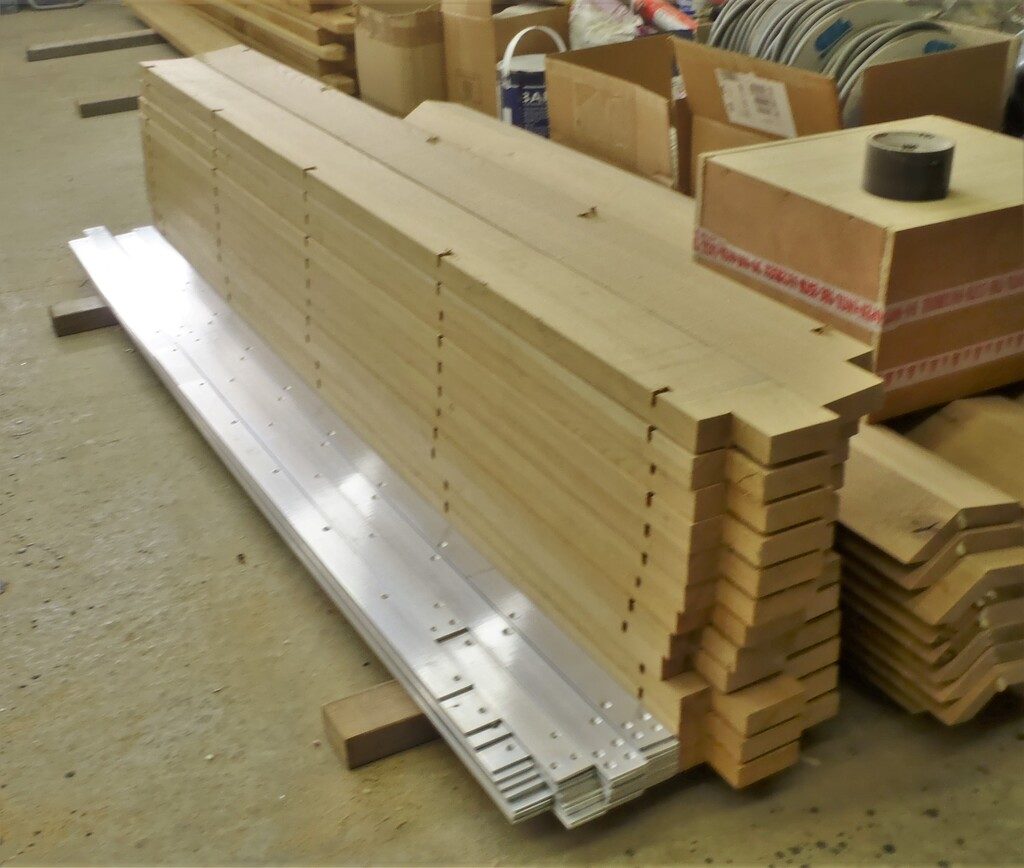 Then all the sill and header pieces were fetch from our main house where they have been waiting for this moment, got a thorough sand to remove any oxidation effects for being exposed to air for well over six months. But one of the little jobs was to glue in little triangular pieces into the headers, to block off a gap that was visible when the octagon wings were installed. We glued 24 pieces and nailed them into place and after lunch, power sanded the area to remove the glue and any excess wood to get a smooth finish. 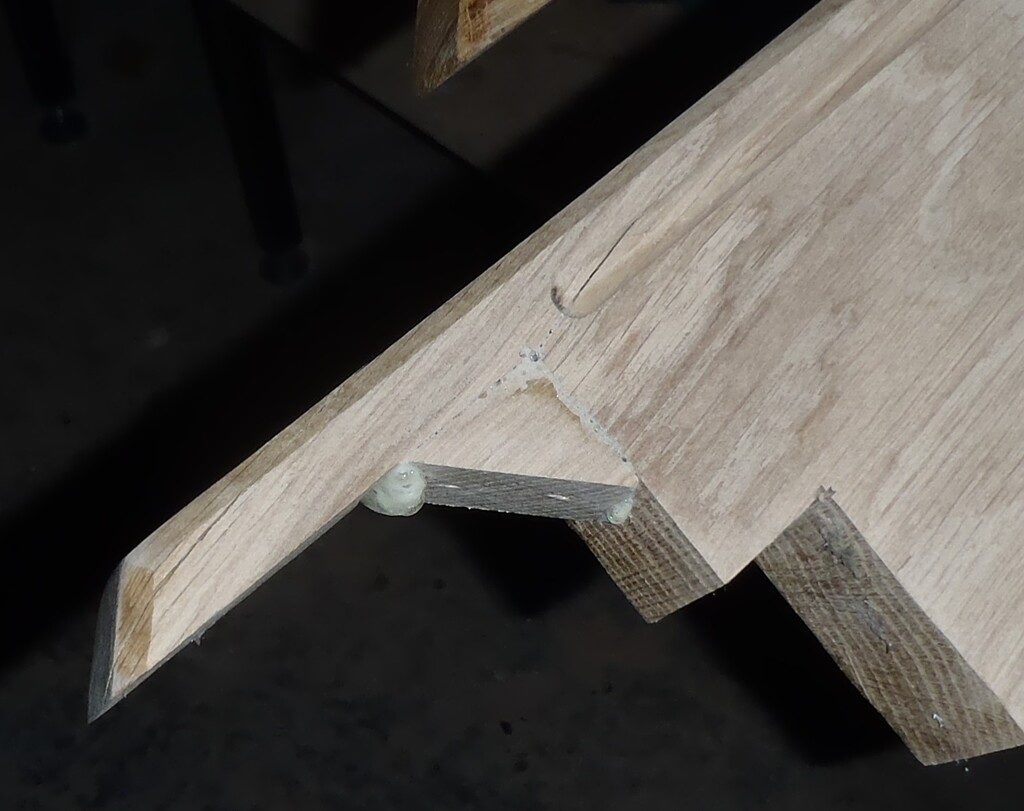 
We also got done was to make a jig frame structure to hold and position the four elements of our window frame so that they are always right angled to each side and also aligns up from sill to header too. The basic design is done and we will add further pieces to it to hold the sill and header pieces. 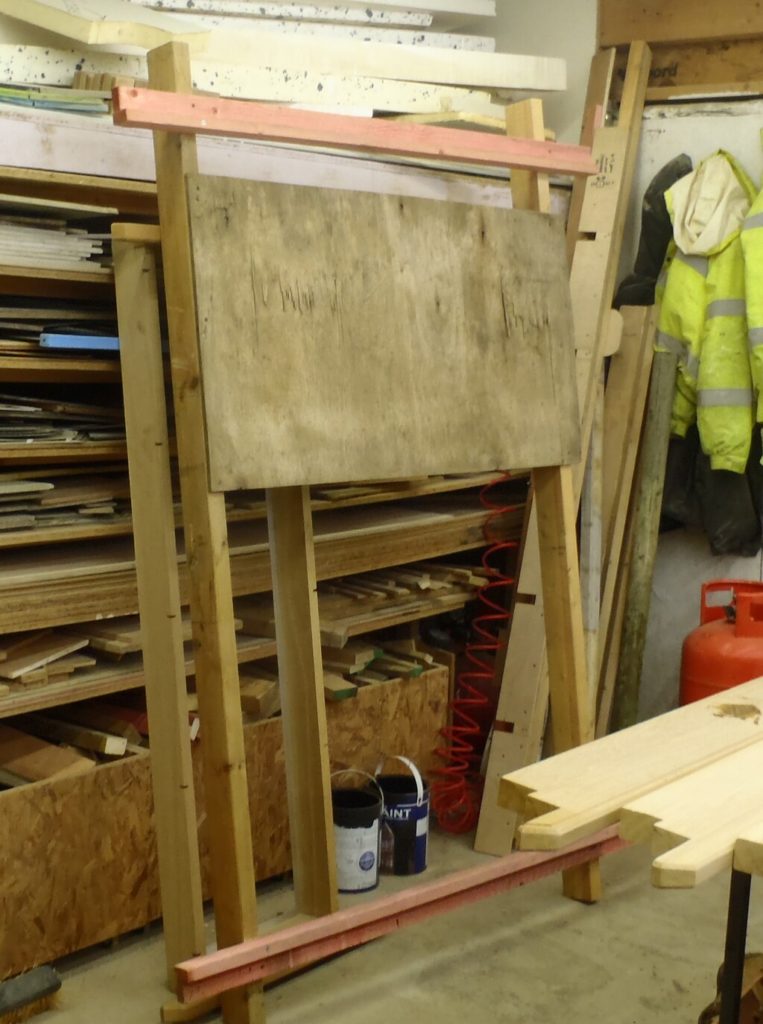 
The last thing that got done for our week’s work, finally, was to fill little holes in the oak sill pieces and some of the header ones too, using a mixture of polyester resin and wood sawdust. This was shoved into the various sized knot holes and we will rub down these repairs next week. 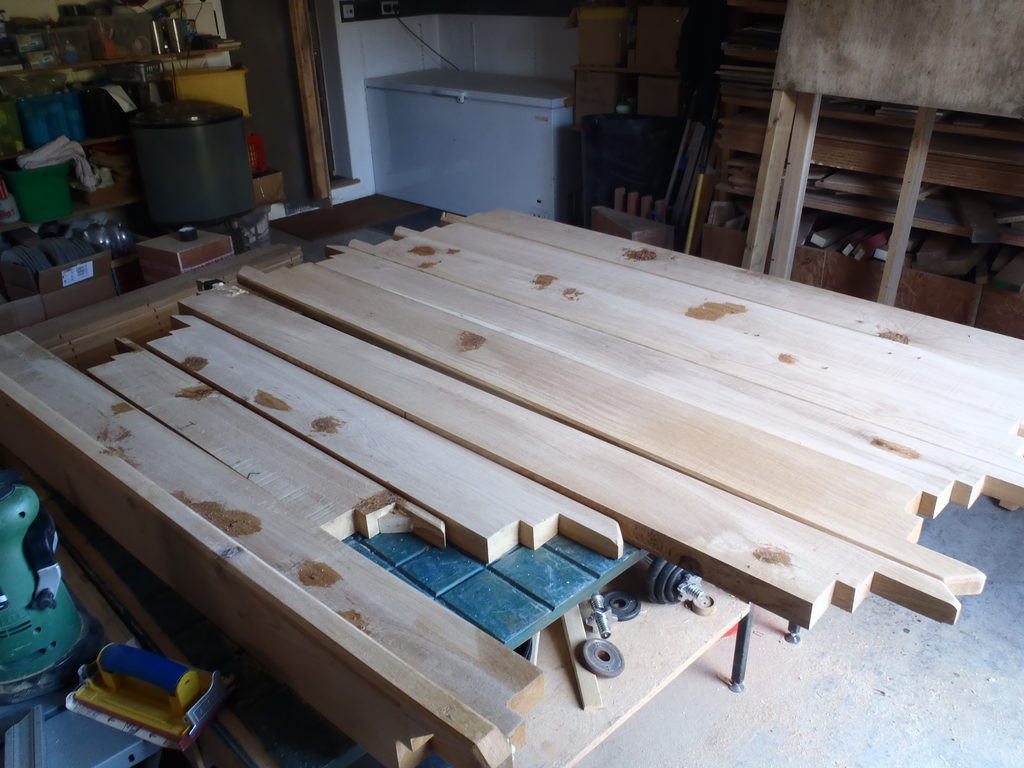 
It was a good week of work with only one afternoon of interruption so we got a lot done. Next week, hopefully, will be another good week and we should get our twelve window frames created.