For our week’s work, we got on with the next three sections, the L, M and N which forms a U shaped inset. We first got all the tile battens up on L section and then used up the remaining full length battens we had up on the platform to do the first eleven lines on the M roof, all by Monday lunch time.
We then started putting up the slates on the L slope, to have a change of job as it can get painful on our muscles in our legs having to crouch down, especially doing the slates. 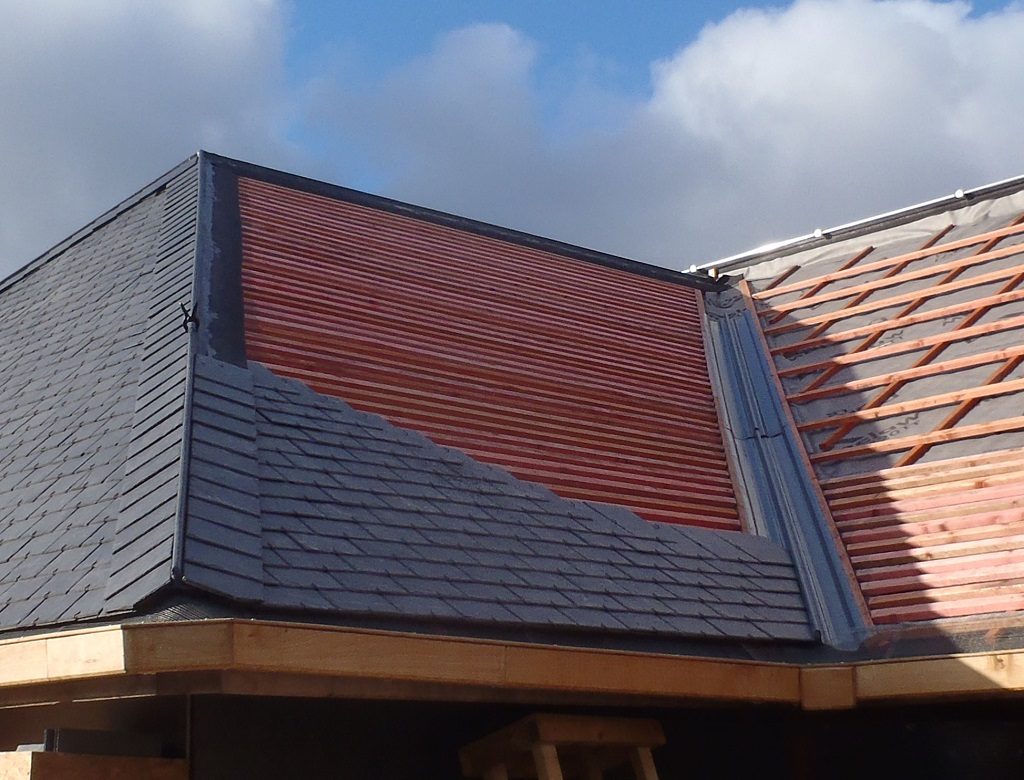 
Being such a short section of the roof, we are having to stop and start a new diagonal strip of slates quite often (starting at the valley and stopping at the hip), and that slows us down considerably. By the end of Tuesday, we estimated to have put up only about 280 slates for a day and a half of work.


Wednesday saw the “almost” completion, with another 300 slates, of the L strip of roof, only leaving a small triangular bit right up at the top of the valley. We needed to cut and trim the third small length of the fibre-glass trough to fit, modifying one batten to make sure the trough will go as high as possible to ensure capture of all the rain water. 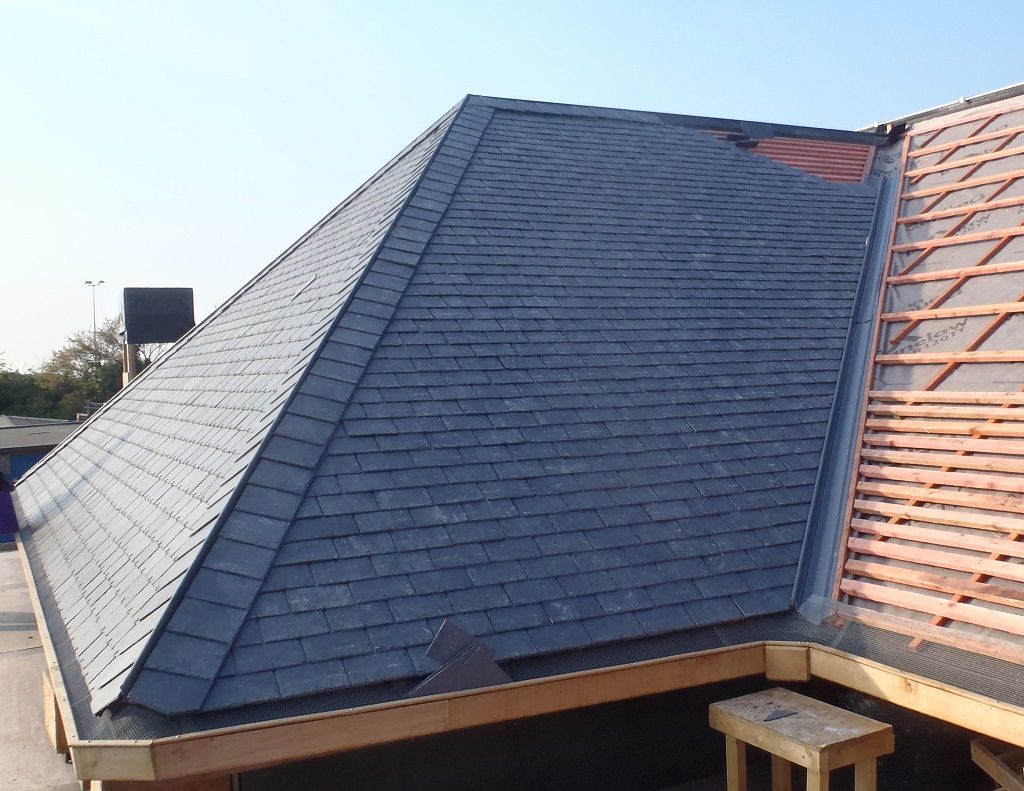 
On the next morning, on Thursday, we trimmed off the bull nose middle part of the trough and reapplied a new layer of fibre glass woven mesh and dark grey resin to seal up and form a solid waterproof trough again. 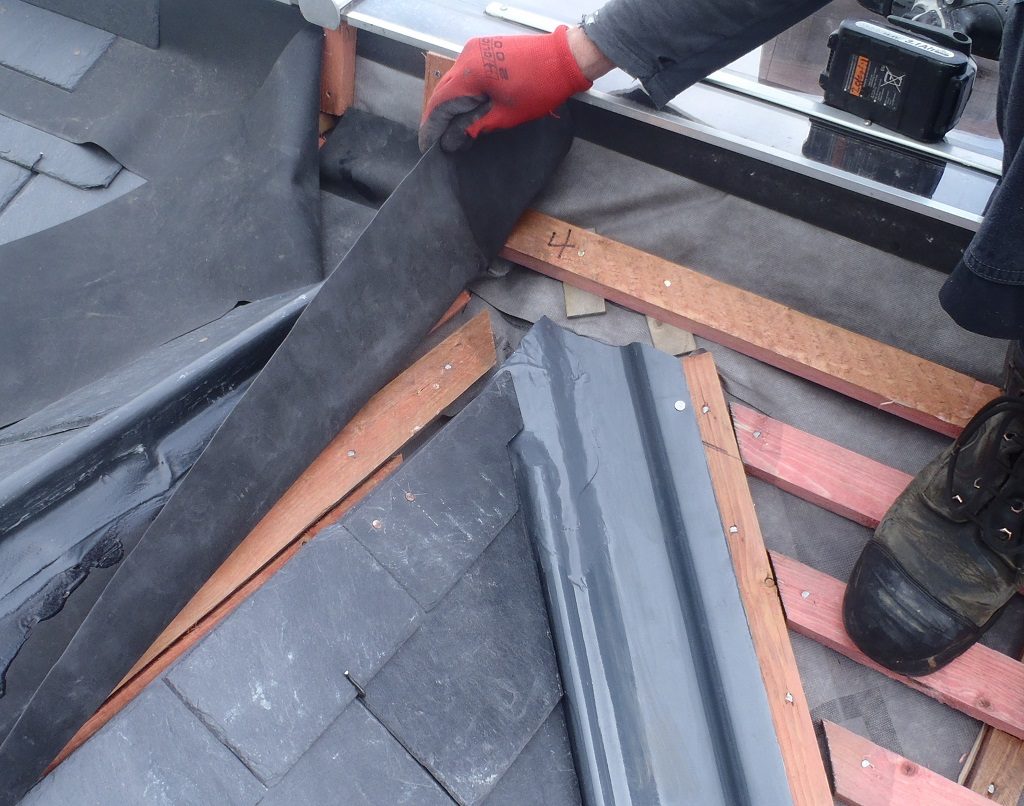 
While the resin was hardening, we spent most of the day (running late into the afternoon because we thought there was going to be a heavy rain shower mid-afternoon plus also we had a meeting to attend) putting up lots and lots of tile battens up on the M section. We used thirty or so full length battens to cover almost the whole of this section and only has the left-over bits to fill in next week.
After our late lunch, and no sign of the rain, we took out our new modified trough out and fixed it into place and then continued putting in the final fifty slates or so to completely finish the whole of the L section, including nearly all the flashing tiles too. The final part of the intersection of the four roof sections will be completed when we reach it with the slates on M next week, as we need to know exactly were the slates meet. 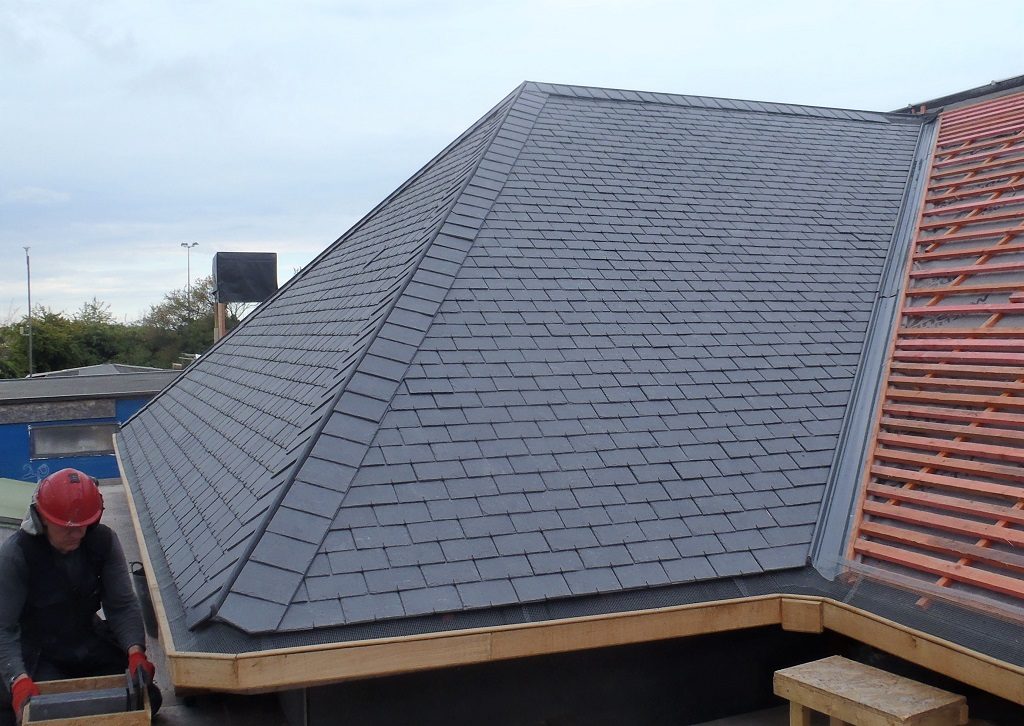 
The next two days (Friday and Saturday) were washed out so we didn’t fancy working in the wet and slipping on the battens. We will resume next week on Monday and finish putting the tile battens on M and then start slating that segment next. We have covered about twenty percent of the roof (4 segments) so far but it will jump to about thirty-three percent when we get both the M and N sections finished, which hopefully won’t be too long in coming.